About the Mississippi Sports Hall of Fame 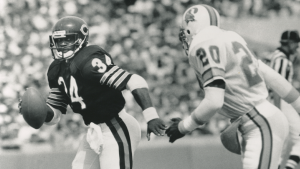 In April 1991, the Mississippi Sports Foundation was conceived over a casual lunch at a Jackson eatery. Today, with enthusiastic statewide support and some 500,000 visitors later, this once casual concept proudly stands as “Mississippi’s First Museum for the 21st Century.”

Memorabilia from the former Dizzy Dean Museum is also a part of the Museum’s second floor exhibit area.

And since its official opening on July 4, 1996, the Museum has hosted visitors from every state in the Union and from dozens of foreign countries

The goal of the Museum, is to provide an exciting and informative experience for every visitor. The Museum is especially concerned about keeping memories alive among the young people of today and tomorrow.

As the late Michael Rubenstein, the museum’s first executive director, would point out, it has been over 30 years since Walter Payton ran with a football or since Archie Manning threw one. It’s been even longer since earlier legends like Jake Gibbs, Bailey Howell and Dizzy Dean performed their athletic feats. The Museum aims to feature these sports heroes in a modern, hands-on format children can relate to and learn from.

“We’ve got such an incredible sports story to tell in Mississippi,” Cleveland says. “Over the course of my sports writing career I covered Walter Payton, Jerry Rice and Brett Favre essentially from high school through the Super Bowl. You’re talking about the leading receiver and scorer, the leading passer and the second leading rusher in NFL history, all from rural Mississippi. What other state can come close to that? It’s a story we need to tell, tell well and keep telling.”

Through a self-guided experience, you can retrieve archival footage, interviews and achievement data at your own pace with just the touch of a finger thanks to interactive kiosks. The Museum is designed for visitors to learn by doing, listening, reading and watching.

Funding for the Museum is derived from a partnership of private and public sources. The Mississippi Legislature approved the issuance in bonds to partially fund the design, construction, and exhibit production of the Museum.

Not one cent of tax money has been given to the Museum for its operation since it opened on July 4, 1996. The Museum raises 100% of its operating funds each year.

Since its opening, existing exhibits have been updated, and new exhibits and galleries are continuing to be added. From the sandlot to the Super Bowl, the Mississippi Sports Hall of Fame and Museum is a living, breathing testament to the competitive spirit – a $4.5 million state-of-the-art facility reflecting… tracing… telling… and re-telling the stories sports legends are made of….