Notes, quotes and an opinion or two…
I have  been amazed by the reactions to The Clarion-Ledger picking up my syndicated column for its online (Wednesday) and print (Sunday) editions. Apparently, many readers mistakenly believe I have gone back to work for the CL.
Couldn’t be further from the truth. The Mississippi Press Association has been syndicating my column for weeks now. Approximately 25 newspapers, dailies and weeklies, across Mississippi publish the column. The Ledger, a member of MPA, signed on recently to begin running the column. I appreciate all the editors who have decided to publish the column and all the readers across the state. We took five newspapers at my house growing up. My dad was a sports writer. My brother and I spent most our lives as sports journalists and my son has done his share, as well. I was born with ink in my blood and am happy to be back in the sadly diminishing cadre of ink-stained wretches.
Speaking of that diminishing army, my heart goes out to the good people laid off in the most recent round of cutbacks at the CL. Among those were assistant sports editor John Hall, one of the best page designers I ever worked with, and Bill Spencer, who was working at the Ledger when I got there in 1979. You can’t replace institutional knowledge like Spencer’s. . . . Rod Walker, the Ledger’s lead high school writer has turned in his two-week notice as well. Walker, another knowledgeable, talented reporter/columnist, is headed for New Orleans to work for the new Baton Rouge Morning Advocate’s New Orleans edition….
Meanwhile, my heart — and 99 percent of my energy — is with your Mississippi Sports Hall of Fame and Museum, as we continue to renovate and update the Magnolia State’s 17-year-old sports shrine. Over the next few months you will see a facelift — outside and inside — and many more exhibits.
Thanks to a dedicated staff — Margaret (Ferriss) White, Lulu Maness and Cully Turner — we just enjoyed our most successful BancorpSouth Hall of Fame Induction Weekend ever, which will help us achieve many of our goals for improvement. . . .
One of the highlights of the Induction Weekend was Brett Favre showing up at Doc

Harrington’s reception Friday eventing to honor the man Favre says helped save his football career. Here’s Favre with Doc and his wife Phylis, picture at the reception. . . . You can read my piece on the Favre-Harrington relationship here.
Long-time readers — and my wife — know I watch the Atlanta Braves play every chance I get, which is four or five times a week.  I say that to say this: Former M-Brave Andrelton Simmons is playing shortstop as well — and perhaps better — than I have ever seen the position played. He gets to balls nobody else reaches. His arm is ridiculously strong. He makes extremely difficult plays look almost routine. He wins games with his glove — and his bat. He will not turn 24 until  Sept. 24. He is a Hall of Famer in the making. . . .
The Braves are white-hot, threatening a run-away in the NL East. The key, of course, is to be this hot in September and October. They certainly haven’t been the past two seasons, but this team seems different. . . .
A team of U.S. Junior golfers was defeated 8-4 by China in a USGA- sponsored international competition held in the Shandong Province of the People’s Republic of China. But here’s what Mississippians need to know about that: Three of the four U.S. points were scored by just-turned-15-year-old Jacksonian Wilson Furr, who won all three of his matches. Furr was fresh from making the round of 32 at the U.S. Junior Championships in Truckee, Cal. He is the real deal, a splendid athlete who loves — and works diligently  — at golf. He now turns his attention to what he says will be his last season as a football quarterback as a ninth grader at Jackson Academy. You can read more about Furr here.
Archie Manning is recovering nicely from 5 1/2 hours of back surgery a couple weeks ago. “Almost human,” Arch answered, when asked how he felt. “It’s coming along, but I don’t wish this on anybody.”
Another former Ole Miss Rebel, Patrick Willis, has undergone much less intrusive surgery to repair a broken hand and is expected to be the in the lineup when the San Francisco 49ers open the season.. . . .
Lance Lynn, 13-5,  pitched eight innings of four-hit  baseball, striking out 11 to pick up his 13th win for the St. Louis Cardinals Sunday. The Cards beat the Reds 15-2 and the Reds’ only two came on a homer by Zack Cozart, Lynn’s former Ole Miss teammate. Cozart, now with nine homers, is hitting .244. . . . Taylorsville native Billy Hamilton has raised his batting average to .249 and has stolen 65 bases for the Class AAA Louisiville Bats, the Reds top minor league team.
Mississippi State standout and C Spire Ferriss Trophy winner Hunter Renfroeis off to a hot start in Rookie league, hitting .303 with five homers and nine doubles in his first 102 plate appearances with the Eugene Emeralds in the Northwest (rookie) League.
I’ll leave you with this photo, which shows why I love my job at your Hall of Fame so much: 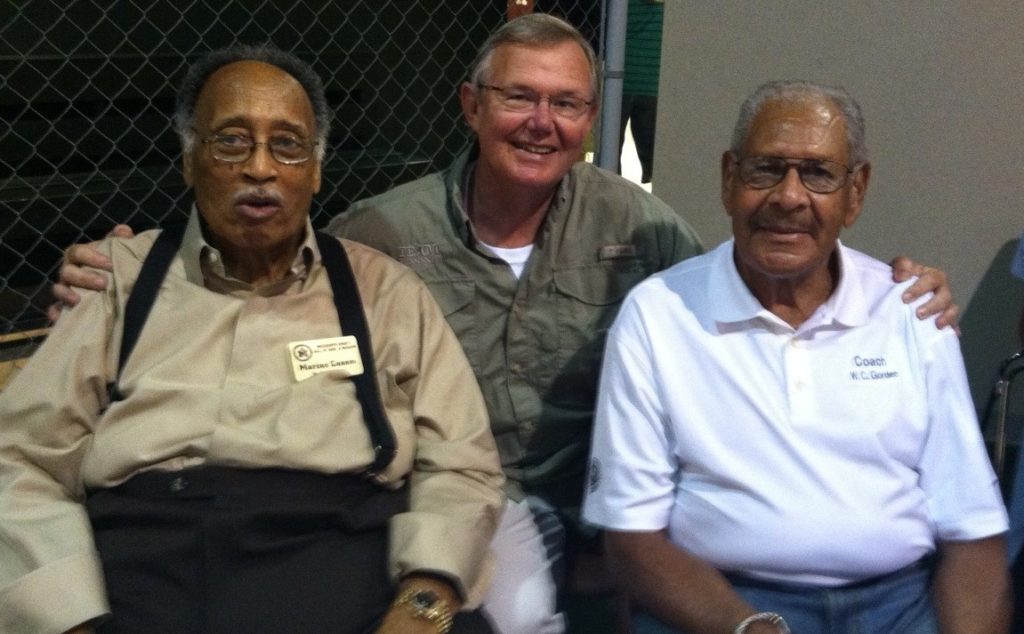 The Godfather (Marino Casem), W.C. and me, at Saturday morning’s Hall of Fame Meet and Greet.

•••
To support your Mississippi Sports Hall of Fame and Museum, click here.
•••
To view photo galleries from this weekend’s activities, click here.