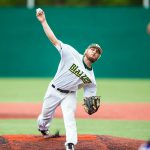 • Tyler Akins, Belhaven University, who leads NAIA
nationally in saves. Akins, a senior from Madison,
pitches and plays first base. He has a 3-1 record with
a 1.81 earned run average, and 17 saves. As a hitter,
he is second on his team with a .340 average and
leads the team with 25 extra base hits and 47 RBI. 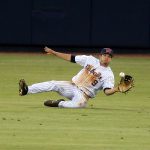 • Ole Miss outfielder Auston Bousfield, who leads the
Southeastern Conference in hitting. A junior from
Oakland, Fla., Bousfield is hitting .367 with 21 extra
base hits and 40 RBI. He has stolen 15 bases
(in 16 tries) and played errorless ball in the field.

• Ole Miss pitcher Chris Ellis, the Rebels Friday night starter
with a perfect 8-0 record. Ellis, a Birmingham, Ala., junior,
has a 1.96 earned run average and opponents are hitting
.258 against him. 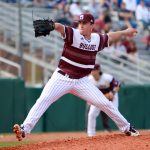 • Mississippi State relief pitcher Jacob Lindgren, who
has struckout nearly two batters per innings pitched.
Lindgren, a junior from Bay St. Louis, had a 4-1
record and a 1.01 ERA. He fanned 82 batters in 44
innings and opponents have hit .125 against him. 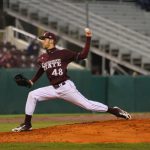 • Mississippi State pitcher Ross Mitchell, a junior from
Smyrna, Tenn., compiled a 7-4 record with a 1.98
earned run average. Opponents hit just .215 off him.


All five and their coaches will attend the Ferriss Trophy awards luncheon on May 19 at the Mississppi Sports Hall of Fame and Museum beginning at 11:30. Coaches and scouts will vote again from among the five finalists. Also, fan voting will account for 10 percent of the final voting. Fans can vote by logging on to csopavoting.com. The voting will last until 5 p.m. May 18 (Sunday).
Tickets ($35) to the luncheon are available by calling 601 982-8264 or by going to https://msfame.liquidcreative.net/c-spire-ferriss-trophy/.
Instead of a speaker, Mississippi baseball legend Boo Ferriss, the trophy’s namesake, will do a Q and A with audience participation.
Hunter Renfroe of Mississippi State was last year’s Ferriss winner.
Other past winners include: