Ben Puckett always seemed to this observer a force of nature. He was square-jawed and, in

his younger years, barrel-chested with the forearms of a blacksmith. But it was not his physical appearance that made him seem such a powerful force.

No, Ben Puckett believed in himself and he believed in his family. He did things his way, which was with the concrete positivity that his was the right way. Where others saw a roadblock or a deal-buster, Ben saw a challenge.

There’s an old saying, my daddy used to use all the time for Ben’s kind of attitude: “That ain’t no hill for a stepper!”

Ben Puckett, who died Sunday at 83 following a short illness, was a stepper with a huge, confident stride. 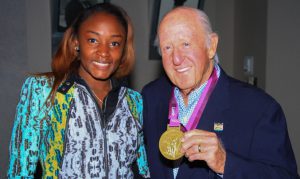 I was proud to call him a friend. We shared a love of sports and the people involved. He especially loved the Mississippi State Bulldogs and the Olympics. He poured much of himself into both.

Said long-time Mississippi State athletic director Larry Templeton, “Mississippi State was his school, and he was proud of it, and he was 100 percent behind us all the time. He was a great fan, one that never complained and always wanted to help. He made his contributions behind the scene. He didn’t want publicity; he just wanted to make us better.”

As for the Olympics, Ben worked tirelessly in support of Mississippi’s Olympic effort. He served as the Mississippi Chairman of the U.S. Olympic committee for 16 years and as co-chairman for another 10. He attended each Summer Olympic Games from Mexico City in 1968 to Sydney in 2000. In 1996, he helped guide a successful effort to bring other country’s Olympic teams to Mississippi to train in preparation for the Atlanta Games.

“Ben had an energy level that was unbelievable; nobody could keep up with him,” Wells said. “I think his love for the Olympics went back to the first games he attended in 1968 at Mexico City. He loved the competition. He was a competitor himself and he loved watching great athletes compete.”

Continued Wells, “On every trip we ever made, Ben squeezed something into every minute of every day. He didn’t want to miss anything. He wanted every second of every day to count.”

Ben Puckett used that energy and positivity to become a remarkably successful businessman. He joined Stribling Machinery in 1952 as an accountant. Years and years later, that company became Puckett Machinery with Ben, then son Richard and now grandson Hastings as the CEO.

You should know that Ben Puckett — and thus his family — were huge supporters of your Mississippi Sports Hall of Fame and Museum. Just this past March 27, we held a reception to dedicate our refurbished Olympic Room, sponsored since the museum’s opening in 1996 by the Ben Puckett family.

Ben was here, full of energy as always, and joined by much of his family. He greeted warmly Ralph Boston, whom he watched compete in the those 1968 Mexico City Games, and also Bianca Knight, 2012 Olympic gold sprinter from Ridgeland. Ben’s eyes sparkled when Bianca took her gold medal and draped it around his neck.

Just over two months later, it is so hard to believe Ben has left us. We are left with the consolation that he lived a remarkably productive life and leaves behind a family that carries so many of his positive traits.