Buckner has made his mark on Miss. sports

Over the next six days, we will feature the Mississippi Sports Hall of Fame Class of 2013 inductees in alphabetical order. First: Bill Buckner.
Bill Buckner, for 25 years now, has headed Mississippi’s Fellowship of Christian Athletes. Under his leadership, FCA has grown exponentially.
Buckner had no staff to begin with. He now has 21 full-time workers, six part-time and four volunteers. From fewer than 100 schools in 1987, FCA has spread to 390 campuses. Through FCA, Buckner has helped change more lives than he can count.
But it is important to remember that Buckner, who will be inducted into the the Mississippi Sports Hall of Fame on August 2, first made his mark as a football quarterback and then as a football coach.
He grew up in the community of Longview, eight miles south of Starkville on Highway 12 where there was no traffic light but there was a Buckner General Store, opened by his grandfather. He was one of six children, who played together and prayed together. His father was a deacon in the Baptist church. Much of his family was — and is — involved in mission work.
Bill grew up a Mississippi State fan, selling concessions at Scott Field and in the gymnasium where Babe McCarthy’s basketball teams won championships. His first hero was Hall of Famer Johnny Baker, a great end. But Bill always played quarterback. As they said in the Longview community, “That Buckner kid has an arm!” 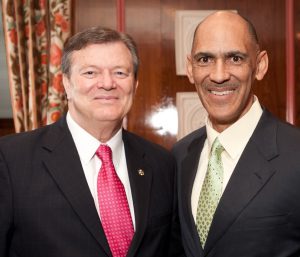 Bill Buckner, left, and Tony Dungy at an FCA fundraiser.

He quarterbacked first at Starkville High School and then for the legendary Hall of Fame coach Bull Sullivan at East Mississippi Community College in Scooba. Sullivan was 20 or 30 years ahead of his time in offensive football. In the early 1960s, he was spreading the field and throwing the ball 50 times a game.
In Buckner, he found the arm and brains he needed to make that offense go. Buckner became a junior college All American, throwing for 47 touchdowns over two seasons. He would have had many more if not for a broken jaw that ended his sophomore season prematurely. East Mississippi was 7-0 and ranked No. 1 in the country when Buckner had his jaw broken. Without him, they finished 8-2.
But Buckner had senior college scholarships from around the country, including Tennessee. He chose his hometown Mississippi State Bulldogs. But the Bulldogs were a running team at the time and Buckner’s skill set was not a good fit. He did throw the first two touchdowns in history of the Astrodome but spent most of the season on the sidelines. Nevertheless, he considers his one year at State a blessing because there he was introduced to FCA, his life’s calling.
His senior year, he transferred to Delta State where Horace McCool promised to throw the ball and delivered. Buckner threw 16 more touchdowns and then signed a pro contract with the Atlanta Falcons. The Falcons had Buckner play two seasons in a developmental professional league at Huntsville, where Buckner led his team to a division championship and where he also was introduced to coaching at Huntsville High.
A highly successful coaching career — that included high school and junior college ball — ensued until in 1987 Buckner was offered the head of the FCA program.
He followed his heart and he has never regretted it.
“I loved coaching but this ministry is my calling,” Buckner says. “I have been so blessed.”
•••
Tickets to the August 2 BancorpSouth Induction Banquet at the Jackson Hilton are available by calling 601 982-8264.