Ole Miss junior quarterback Bo Wallace, the 2012 C Spire Conerly Trophy winner, continues to put up huge numbers in 2013. His 416 yards passing and 428 yards of total offense in last Saturday’s 34-24 victory over Arkansas both rank as the second-best single-game performance in Ole Miss football history.
Wallace has moved into fifth place in school history in career total offense (5,942 yards), sixth in passing yardage (5,386), fourth in passing TDs (36) and second in 300-yard passing games (7). Wallace currently ranks third in the SEC and 25th nationally in total offense.
Wallace is joined on this week’s C Spire Conerly Trophy watch list by two teammates, safety Cody Prewitt and wide receiver Donte Moncrief. Prewitt is tied for the SEC lead in interceptions with four and is second on the Ole Miss team in tackles with 54. Moncrief had seven catches for 149 yards and a touchdown last Saturday against Arkansas and ranks fourth in school history in career receiving yards (2,080), sixth in receptions (138) and third in receiving TDs (19). 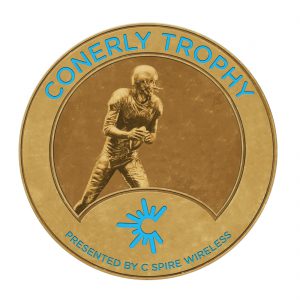 Preseason All-American guard Gabe Jackson has graded out a champion (above 80 percent) for every Mississippi State game this season. He has not allowed a sack and has recorded 22 knockdown blocks, including three in last week’s 51-41 loss at Texas A & M. He has won SEC Lineman of the Week twice this season and is rated the top guard in the 2014 draft by many experts. A chief beneficiary has been sophomore quarterback Dak Prescott, who passed for 149 yards and ran for 154 against the Aggies. Prescott has accounted for more than 2,300 yards of total offense and 19 touchdowns this season.
Alcorn State’s Arnold Walker, who appropriately wears No. 1, became his school’s all-time rushing leader in a 50-35 victory over Prairie View. Walker carried 26 times for 132 yards and two touchdowns in the game. He broke Augustus Lee’s 34-year-old record and now has 1,088 yards on the season, with two games remaining. Walker had earlier surpassed Steve McNair on the Alcorn all-time rushing list.
Southern Miss senior defensive tackle Khyri Thornton continued his outstanding play in a loss at Louisiana Tech. Despite constant double teams, Thornton was in on five tackles, including two for losses totaling seven yards, against the Bulldogs. The 308-pounder from Panama City, Fla., has been a four-year standout with 112 career tackles including 30 behind the line of scrimmage.
Jackson State quarterback Clayton Moore threw for 311 yards and two touchdowns in a 26-20 victory over Alabama A & M.  Moore has accounted for more than 2,300 yards of total offense and 17 touchdowns this season. Zach Pendleton, Moore’s favorite target, caught nine passes for 191 yards last Saturday and now totals 42 catches for 885 yards and eight touchdowns on the season.
Junior running back Mike Bathelemy rushed for 76 yards in Millsaps’ ninth consecutive victory last Saturday. He has run for 1,258 yards, 140 per game, and 19 touchdowns. Defensive end Zach Bell made two sacks in the game, bringing his total to 12 on the season, ranking him in the top five of all of Division III defenders.
Belhaven offensive tackle Matt Hall, all 6-feet-10, 325 pounds of him, led the Blazers to a 547-yard offensive output in a 38-34 loss to the University of Pikeville (Ky.). Hall started all 11 games as a sophomore at Ole Miss and has started every game at Belhaven the past two seasons. Blazers defensive back Darius Wren had eight tackles, including two for losses, and now has 77 tackles on the season.
Delta State wide receiver Ricky Hunt had a 29-yard touchdown catch in DSU’s 77-0 victory over Concordia. Hunt ranks near the top in all Gulf South Conference receiving categories with 58 catches for 684 yards and six touchdowns.
Mississippi Valley State junior cornerback Avery Boykin leads the SWAC with five interceptions and is tied for eighth nationally among all FCS schools in interceptions. He has 50 tackles and five pass breakups this season. Robert Simpson, a senior defensive end from Gulfport, has 55 tackles, 11 behind the line, 3.5 sacks, two fumble recoveries, four pass break-ups and two blocked kicks.
Mississippi College quarterback Jonathon Redd has now accounted for 24 touchdowns in the Choctaws’ last six games and 25 on the season. He is the first player in MC history to account for at least 10 touchdowns both rushing and passing in a single season. Linebacker Jake Weddle, with 107 tackles, has become the first Choctaw in 11 years to record 100 tackles in a single season. Weddle also nine tackles for losses and two pass interceptions.
The 2013 C Spire Conerly Trophy Banquet will be held at the Mississippi Sports Hall of Fame and Museum on Dec. 3. There will be a 5:30 p.m. reception, followed by a 6:30 p.m. banquet. Tickets are available by calling 601-982-8264.