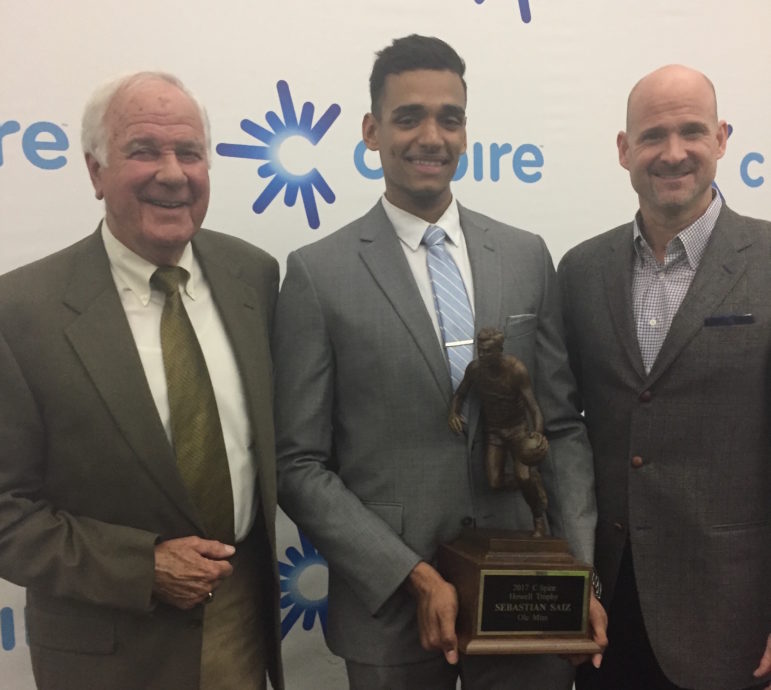 Notes, quotes and an opinion or three from the C Spire Howell and Gillom Awards luncheon Monday at the Mississippi Sports Hall of Fame and Museum:
• First thing first: They got the winners right. Sebastian Saiz won the Bailey Howell Trophy after averaging a double-double (15 points, 11 rebounds) for the season. Victoria Vivians became the first three-time Peggie Gillom Trophy winner after leading the 29-4 Mississippi State Lady Bulldogs to second place finishes in both the SEC regular season and tournament.
Saiz won over Delta State’s Devin Schmidt and Mississippi State’s Quinndary Weatherspoon. Vivians won over teammate Morgan William and Southern Miss senior Brittney Dinkins.
• Bailey Howell, who knows a thing or two about double-doubles, applauded the choice of Saiz, a senior who has improved so much during the course of his Ole Miss career.

“Saiz is a great player,” Howell said. “He had 19 double-doubles this season. What that tells me is that he comes to play every night. He plays with great effort. I believe he has a future in basketball after college. I think he can make money playing this game.” 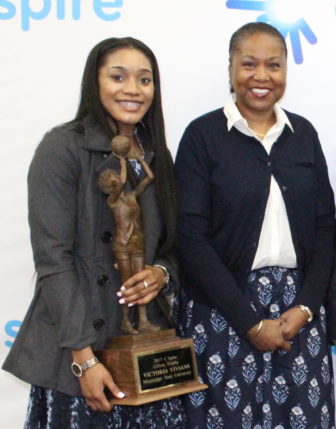 • Vivians said she did not expect to win her third Gillom.
“I really thought Morgan would win it, and Brittney had a great season, too,” Vivians said. “Really, it could have gone to several players on our team. To me, it’s a team award.”
• State coach Ben Howland had a message for those who question how Delta State’s Devin Schmidt would fare if he played Division I basketball. Schmidt, a guard, averaged 22.6 points per game for the Statesmen and also led his team in rebounding, assists and steals.
“We played them in an exhibition game and I was really impressed with Devin,” Howland said. “He could play for a lot of people, and I am talking about mid-to-high level Division I teams. He’s a tough, tough kid who can really shoot it.”
Schmidt had 17 points and six assists in the pre-season loss to State.
• Mississippi State women’s coach Vic Schaefer on Morgan William: “She is the engine who makes us go.” 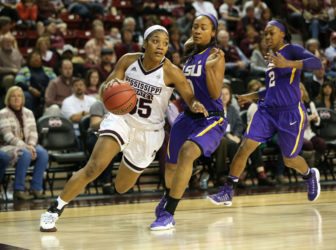 Victoria Vivians drives to the bucket against LSU.

Schaefer on Vivians: “She gets everyone’s best defender and every coach’s best game plan every time she goes out there. … When I think about Victoria I think about her pure joy of playing the game of basketball.”
• As always, Ole Miss coach Andy Kennedy was full of one-liners, including this one about his influence on Saiz, who hails from Madrid: “He has become a fluent curser in multiple languages.”
But Kennedy also got serious about Saiz, at least to a point: “Sebastian has a great spirit about him. His spirit fills the room. He’s always enthusiastic, always positive, plus he’s got great hair …”

• McComb native and Belhaven grad John Brady, who coached LSU to the 2006 Final Four, was the keynote speaker and he had several pertinent connections to talk about at the Howell/Gillom luncheon.
As a Mississippi State assistant coach, he recruited Andy Kennedy, who went to North Carolina State before finishing his playing career at UAB.
When told he must not have done a good job recruiting Kennedy, Brady responded, “No, I did a great job. I just couldn’t beat Jim Valvano.”
Brady recognized Mississippi Sports Hall of Famer Charley Rugg in the crowd. Rugg, who coached Brady at Belhaven, “is the greatest coach nobody outside of Mississippi knows about,” Brady said, and he’s right.
When Brady took LSU to the 2006 Final Four, he took Rugg with him and had sports announcer Jim Nantz recognize him at a pre-Final Four banquet. What’s more, he made sure Rugg got an LSU Final Four ring, which brings us to who eliminated LSU from that Final Four. UCLA, coached by current State coach Ben Howland, beat the Tigers 59-45 in the semifinal round.
“We had just beaten top-seeded Duke and Texas and were really playing well,” Brady said. “Ben came out with a defensive plan that took us out of everything we had been doing. We couldn’t do anything. He’s a wonderful coach and gentleman.”
• Brady told this one on Kennedy and Howland: “Andy’s a beach guy. He loves to go to the beach. So one day, he’s walking down the beach and he kicks this bottle and out comes a genie. The genie tells him he will grant him three wishes but that there’s a catch. Anything he grants Kennedy, Howland gets double. So Kennedy asks for a 10-year contract, which means Howland gets 20. He says he wants to win a national championship at Ole Miss, and the genie says, OK, but Howland wins two. Then the genie asks what Kennedy wants for his third wish, and Andy says, ‘You see, that piece of driftwood over there? I want you to pick it up and beat me half to death.”
Everyone, including Howland and Kennedy, laughed loudly and at length.
• Delta State learned Sunday night they will play in the NCAA Division II Tournament as a 3-seed in the South Regional at Huntsville, Ala.
“Coach (Jim Boone) had told us we would probably make the field, so it wasn’t a big surprise,” Schmidt said.
The surprise was that DSU will face Gulf South Conference rival Christian Brothers in the first round Saturday.
“We had two really close games that went down to the wire with them in the regular season,” Schmidt said. “It ought to be a heckuva game.”
Schmidt had 27 points, 10 rebounds and six assists in a 65-64 road victory and 24 points, 11 rebounds and seven assists in a 69-67 home victory over Christian Brothers. Clearly, Schmidt can play.
• Schaefer said he was still smarting from the loss to South Carolina in the SEC Tournament finals Sunday but he added this: “We got our mojo back in that tournament. We’re back to playing our brand of basketball.”
Said Vivians, “It’s all about defense. We got back to playing hard on defense, which is what our team is all about. We are definitely back to playing our ball.”
•••
Rick Cleveland is Mississippi Today’s sports columnist. Read his previous columns and his Sports Daily blog. Reach Rick at rcleveland@mississippitoday.org.