Notes, quotes and an opinion or three. . .
No matter who wins these invidual awards (see C Spire Howell, Gillom trophies), there’s always going to be controversy. There was with the C Spire Conerly last fall and there is with the Heisman almost every year.
I have long since lost count of how many awards similar I have voted for over the years. Many times, I picked the winner, just as often did not. I voted for Jerry Rice when Doug Flutie won the Heisman. I voted for Steve McNair when Rashaan Salaam won. I wouldn’t change either vote. The best player in both those cases didn’t win. Same goes for when Peyton Manning somehow got fewer votes than Charles Woodson in 1997.
In my job, this will be the first time I haven’t had a vote in the Howell and Gillom awards. Both would be a difficult choice. You’ve got the leading scorer in the SEC (Marshall Henderson), the leading rebounder in the SEC (Murphy Holloway) and the leading scorer on a remarkably balanced 22-7 Southern Miss team (Dwayne Davis).
In the Gillom, you’ve got a 6-foot-4 post player, State’s Martha Alwal, against two guards, USM’s Jamierra Faulkner and Ole Miss’s Valencia McFarland. For me, it has always been difficult to measure the differences in contributions of bigs and littles.
The award is supposed to go to the “most outstanding player.” It doesn’t say anything about best senior or best citizen,. It doesn’t say anything about how the individual’s team has fared, although I think we’d be silly to presume that those factors don’t come into play. It doesn’t say who finished strongest, either, but that’s always a factor, as well.
I haven’t a clue who win either of these awards, but the voting definitely will be close. And all three finalists should know going in that it’s an honor to be up for any award named after either Bailey Howell or Peggie Gillom, two of the really splendid people in Mississippi sports (and two who would have won for citizenship and scholarship as well as basketball ability.)
Tickets to the awards luncheon at 11:30 a.m. Monday are still available by calling 601 982-8264. Naismith Hall of Famer Van Chancellor will be the keynote speaker.
•••
Got my first look at Gerald Glass, Jr., yesterday at the Big House in Amanda Elzy’s Class 4A semifinal victory and he looked like a taller version of both his daddy (who will be inducted into the Hall of Fame in August) and his mother, Jackie Martin, who both played at Ole Miss.
I was reminded of what we used to say about the elder Gerald Glass: that is “smooth as Glass.” The kid is smooth. He makes playing basketball look effortless when you know it’s not. If he’s a late developer, as his dad was, he’s going to be something.
•••
Mississippi State, for the first time ever, doesn’t have a horse in the C Spire Howell race, but Rick Ray, the first-year coach, says he plans to be at Monday’s luncheon.
“I’ll be there because I should be there,” Ray said.
Thank-you, Rick Ray.
••••
Finally, take a look at MHSAA photographer Keith Warren’s shot from the catwalk of the Mississippi Coliseum. I am reminded of one word: Vertigo. 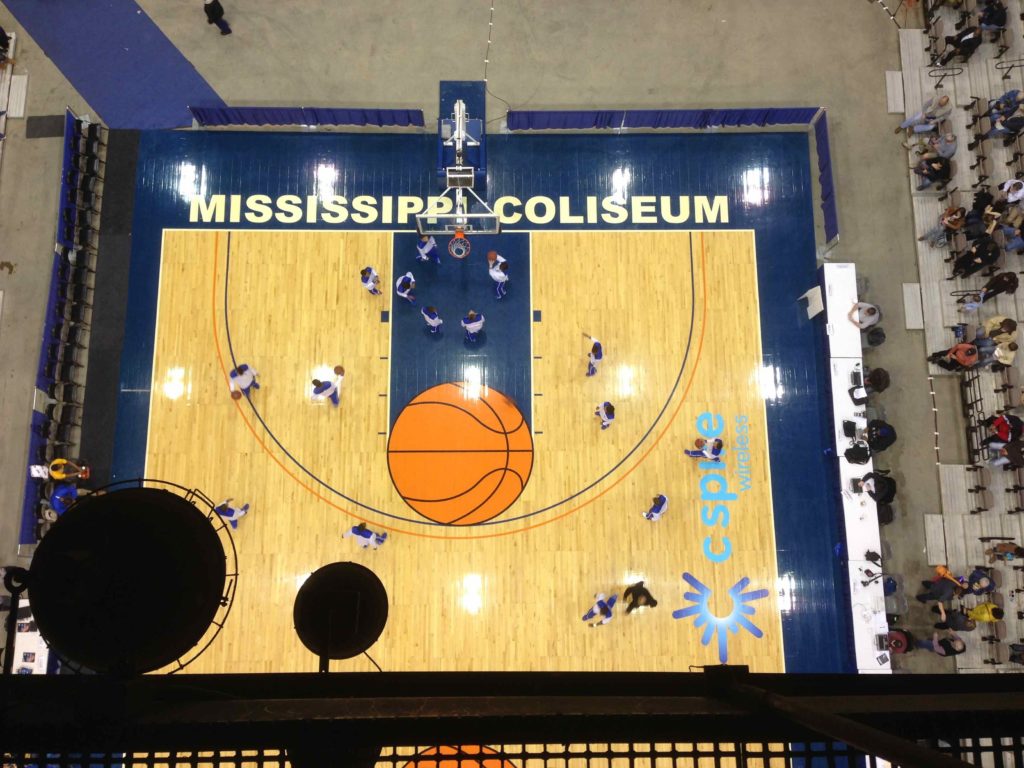