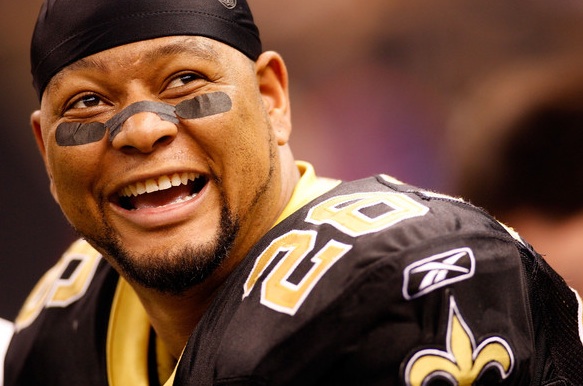 Deuce McAllister was “the best teammate ever, period.”

This is the third in a series about your Mississippi Sports Hall of Fame’s Class of 2014.

Dulymus McAllister needed a locker room all his own as a New Orleans Saint. He was the guy every media member wanted to hear from after nearly every Saints game. That’s because he was unfailingly honest and sincere. My favorite Deuce memory? Has to be when Deuce, at age 28 and after the first of two major knee surgeries, finally got a chance to play in the playoffs. He willed the Saints to a 27-24 victory over the Philadelphia Eagles, running for 143 yards and a touchdown on 21 carries. With the game on the line, he kept pushing the pile while the Superdome crowd thundered: “DEEEEUUUUUCCCCEEEE!” He carried the ball nine times on the Saints’ last 15 plays. The Eagles could not stop him.

Dulymus “Deuce” McAllister achieved much as a football player, including this:
He is the leading rusher and touchdown scorer in the histories of both the Ole Miss Rebels and New Orleans Saints.
And still, we are left to wonder: What if? What if Deuce hadn’t suffered so many injuries with the Saints?
As it is, McAllister rushed for 6,096 yards and scored 55 touchdowns as a pro, both shattering Saints records — amazing considering he played fewer than five seasons before serious knee injuries began to take their toll.
“I think back and, in a sense, I feel like I was robbed,” McAllister once said. “I felt that I could have been a guy that could have made it to (the Pro Football Hall of Fame). I felt like I had that kind of talent.”
McAllister’s talent was built on this foundation: Uncommon size, strength and speed combination, along with an equally uncommon sense of team.
“Deuce McAllister is the best teammate ever, period,” Saints offensive tackle Jon Stinchcomb once said.
Said Saints coach Sean Payton, when he brought McAllister out of retirement in 2009 simply to lead the Saints out onto the field and inspire them, “Deuce McAllister has always embodied the spirit of the New Orleans Saints and the city of New Orleans.”
McAllister grew up in Saints country in the tiny community of Ludlow, near Morton. He played at Morton High School where he was a highly recruited player, both as a running back and a safety (who many thought would grow into a linebacker).
He might have gone to Alabama, but the Crimson Tide coaches told him he was slotted there to play defense. Deuce wanted the ball. It came down to Ole Miss and Mississippi State and McAllister says he chose the Rebels because he thought he could earn playing time more quickly there.
Then Ole Miss coach Tommy Tuberville did switch McAllister to linebacker early in his freshman training camp, but then injuries forced a switch back to running back. McAllister would go on to make All-SEC twice. He finished his college career with Ole Miss records for carries (616), yards (3,060), rushing TDs (36), total touchdowns (41) points (246) and 100-yard games (13).
The Saints picked McAllister with the 23rd pick of the 2001 draft even though they already had Ricky Williams at running back. They never regretted that choice, as McAllister became one of the franchise’s most popular players ever.
“DEEEEEEEEEUUUUUUCE,” the Superdome crowds would roar as McAllister pushed the pile time after time for extra yardage.
McAllister was voted to consecutive Pro Bowls in 2002 and 2003. He suffered a torn anterior cruciate ligament in his right knee in 2005 and then in his left knee in 2007.
Still, in his first-ever play-off start (January 16, 2007) McAllister rushed for 143 yards on 21 carries with one touchdown and had four catches for 20 yards and another touchdown . New Orleans defeated Philadelphia, 27–24 to earn its first-ever NFC Championship Game appearance in the team’s 40-year history.
Said Saints general manager Mickey Loomis, “I don’t know how you rank players all-time in importance to your organization, but Deuce would have to be in our top two or three all-time…he’s exactly what you would draw up in terms of someone to represent your franchise.”
•••
Next: Steve McNair

One response to “Class of 2014: DEEEEEEUUUUUUUUCCCCCCEEEE!”