Class of 2014: Steve McNair, his Airness 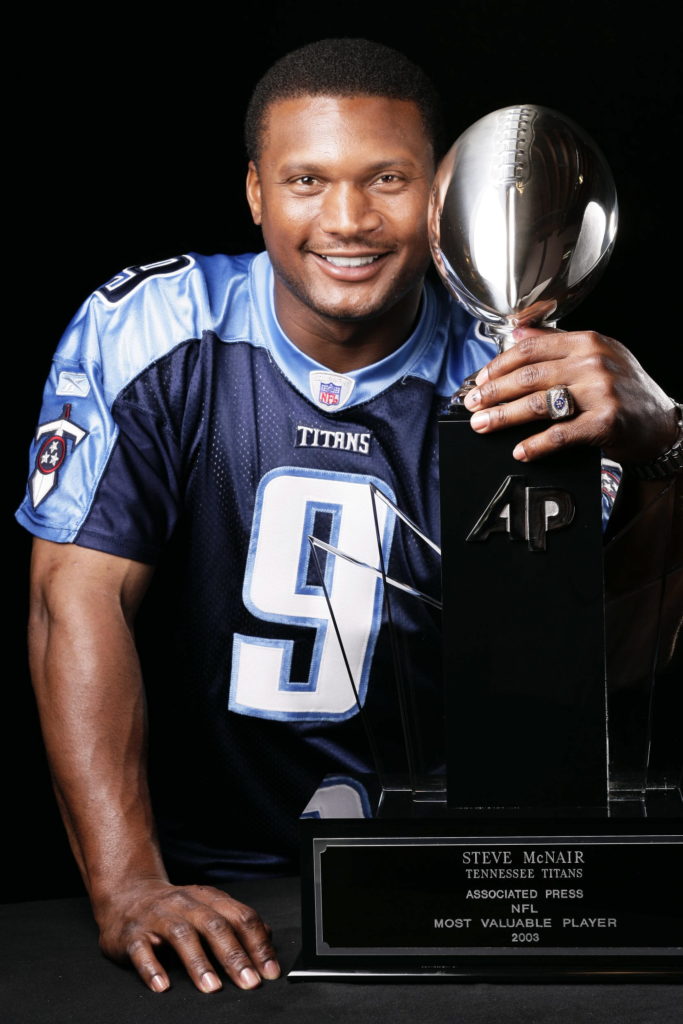 Steve McNair, his Airness, and the NFL MVP trophy.

The first time I saw Steve McNair play football he was a 16-year-old junior at Mount Olive High making the State 1A Championship Game his personal playground. He kicked off through the end zone to start the game. He never came out, playing quarterback on offense, safety on defense, punting and returning kicks. He threw, he ran, he tackled, he made interceptions. Basically, he

did whatever he pleased and led Mount Olive to victory over Smithville. “Remember this name, you will be hearing it again and again,” I wrote. “Stevie McNair.”

Stephen LaTreal McNair brought the national sports spotlight to Lorman and Alcorn State when he set the all-time NCAA record for total offense during his senior season in 1994. Sports Illustrated editors placed him on its the magazine’s cover with the caption: “Hand him the Heisman!”
McNair finished third in the Heisman voting after putting up more than 6,000 yards of total offense and 53 touchdowns in a single season. Wrote beloved Mississippi author Willie Morris for The New York Times of McNair: He is magnificent. He is 6 feet 3 inches and 218 pounds and the fastest man on the field… One of his passes goes 70 yards in the air… If no one is open he will escape for substantial yardage…He is the greatest college quarterback I have ever seen.
McNair, from Mount Olive, was a four-sport star at Mount Olive High, playing football basketball, baseball and, in his spare time, track. As a 16-year-old junior, he guided Mount Olive to a state championship, never coming out of the championship game. He quarterbacked, played free safety, kicked off, punted and returned kicks and punts.
He intercepted 15 passes in 1990 and all the Southeastern Conference powers recruited him to play defense. McNair wanted to play quarterback so he followed in the footsteps on his older brother Fred at Alcorn State. He finished his career with 16,233 offensive yards, a record that still stands.
McNair, nicknamed Air II (Fred was original Air McNair), McNair was drafted by the then-Houston Oilers with the third pick of the 1995 NFL Draft. The Oilers chose to bring McNair along slowly and he did not become the starter until 1997 when the team played its home games in Memphis. He became the team’s star, throwing for 14 touchdowns and running for eight more.
He was only getting started. McNair would make the Pro Bowl three times and was voted NFL MVP in 2003.
He guided the Tennessee Titans to the 2000 Super Bowl in Atlanta. There, the Titans lost to the St. Louis Rams 23-16 when Kevin Dyson caught a McNair pass on the final play of the game and was stopped inches short of the goal line. McNair completed 22 of 36 passes for 216 yards and ran for 64 more in a superb effort.
Throughout his NFL career McNair was known for playing through injuries that would have sidelined others. In a 2002 playoff game against Pittsburgh, McNair had a chunk of skin dangling from the thumb knuckle on his throwing hand. McNair missed two plays as the skin was cut off and then threw for 338 yards and two touchdowns and ran for another touchdown. McNair also played through a dislocated ring finger on his throwing hand, back spasms, bruised and broken ribs and a separated left shoulder. Said McNair’s teammate, tight end Frank Wycheck: “We don’t worry about Steve unless he’s in a cast.”
Said another teammate, running back Eddie George: “Most quarterbacks would walk off the field and never come back. Steve embraced the pain…. there was a toughness (about McNair) that permeated the entire team.”
McNair finished his NFL career with more than 31,000 yards passing and 174 touchdowns.
•••
Next: Calvin Smith.
•••
A limited number of tickets remain for Friday night’s Class of 2014 banquet. Call 601 982-8264 for details.