Class of 2014: The Richard Williams story 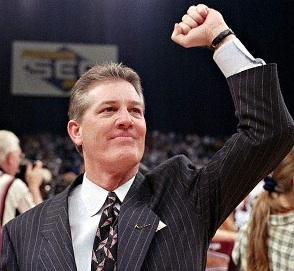 Coach Richard Williams provided me with one of the great rides of my sports writing career. His 1995-96 basketball Bulldogs not only won the SEC Tournament championship in New Orleans, they continued winning until the Final Four at The Meadowlands. Along the way, Richard knocked off coaches named Pitino, Huggins and Calhoun. I remember sitting down with Richard before the trip to New York. He looked at me and I looked at him and we both started laughing. He asked the first question: “Can you believe this s—?”

Richard Williams’ basketball story is like something out of Hollywood movie. In fact, if Hollywood did Williams’ life story, the movie might get panned as just too much fantasy.
Williams never played college basketball. His first basketball coaching job was as a volunteer seventh grade basketball coach. Professionally, he was a junior high math teacher when he started..
From full-time math teacher and seventh grade volunteer coach, Williams rose through the hoops ranks — from junior high, to high school, to junior college, to college volunteer assistant coach, to college head coach, to taking the Mississippi State Bulldogs to the 1996 Final Four.
And here’s the deal: At every step on his road to the Final Four, Williams was, first and foremost, a teacher. The basketball court was his classroom.
In 1986, Williams took over a Mississippi State basketball program that had finished 8-22 overall and 3-15 in the Southeastern Conference the previous season. Four years later, State was 20-9, 13-5 and won the SEC West. Ten years later, State beat Kentucky to win the SEC Tournament and then won four straight NCAA Tournament games to reach the Final Four. 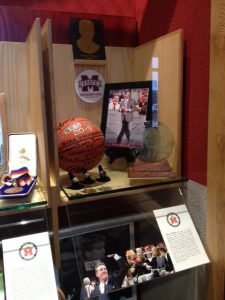 Giving Williams’ story even more a Hollywood touch, he spent many afternoons as a Mississippi State undergrad watching Hall of Famer Babe McCarthy coach the Bulldogs to basketball prominence. McCarthy’s last basketball coaching job before getting the job at State? Why, he was a junior high basketball coach in Tupelo. You couldn’t make it up.
The NCAA Final Four has been going on for 75 years, which means that 300 different teams have participated. Only one of those was from Mississippi: Williams’ 1996 Mississippi State Bulldogs.
Williams, who was named SEC Coach of the Year twice, was a coach’s coach. In fact, many current coaches call on him for advice. Mississippi Sports Hall of Fame coach Van Chancellor says Williams’ advice helped his Houston Comets win one of their WNBA championships. As recently as this past March, then-Jones Junior College coach Jay Ladner credited Williams’ mentoring for helping him guide his Jones team to the national junior college championship.
Williams’ career can serve as inspiration for junior college and high school coaches everywhere. He paid his dues.
From Montebello Junior High in Natchez, he went to St. Andrews Episcopal Junior High in Jackson for two years. Then, it was back to South Natchez High as an assistant coach for two seasons, before he took over as South Natchez head coach for six seasons. Then it was on to Copiah Lincoln Junior College for six more years of seasoning before he went to Mississippi State to serve on Bob Boyd’s staff as a part-time coach.
Boyd recommended Williams as his successor, but Williams never thought he had a realistic shot at the job until he got it.
And he never let his success go to his head.
“I never got into coaching to make money or coach at some high level,” Williams has said. “My love is teaching basketball. That’s what I like to do.”

4 responses to “Class of 2014: The Richard Williams story”