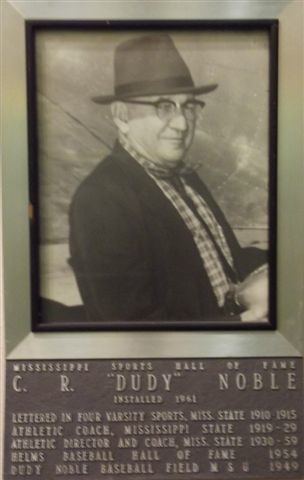 You may have noted Mississippi State won its 1,000th baseball game at Dudy Noble Field Saturday, defeating Portland 2-1.
That’s a lot of victories, especially when you consider State has been playing at Dudy Noble only since 1967. The stadium is named for the great Clark Randolph “Dudy” Noble, one of the charter members of the Mississippi Sports Hall of Fame.
I met Coach Noble when I was a little guy, and he was white-haired and well on up in years. I remember a gruff voice and not much else except for the respect other grown men obviously had for him.
I often wonder how many young folks who attend games at Dudy Noble Field do so without ever knowing who Dudy Noble was. His was a most interesting life and a most interesting story. Dudy Noble is responsible for so much of the rich history of Mississippi sports.
He awarded Hall of Famer Boo Ferriss the first full baseball scholarship in Mississippi history. He hired two football coaching legends, Murray Warmath and Darrell Royal. He hired Hall of Fame basketball coach Babe McCarthy, when Babe was out of the coaching business and had last coached at a junior high. He hired Hall of Famer Jack Cristil, State’s beloved Voice of the Bulldogs, and gave him this sage advice: “You tell that radio audience what the score is and who’s got the ball and how much time is left and you cut out the bull.”
That was back in 1952. I loved the way Cristil described him 52 years later. Cristil said he expected to find a young, well-groomed, business-like athletic director. He met a much different guy.
“Dudy Noble was a big man, over 6 feet tall and quite hefty,” Cristil said. “He was attired in an old cotton, flannel shirt and baggy britches. He had an unruly shock of gray hair that stuck out.”
At State, Noble was known for doing a lot with a little. He ran a tight ship. He made the most of what he had, but he never had much, at least not from a financial standpoint.
Noble was of humble origin himself. Born in the tiny Hinds County of Learned in 1893. He attended State (then Mississippi A & M), where he earned 14 varsity letters in four sports—football, basketball, baseball and track. He graduated in 1915, but not before throwing for three touchdowns and running for two in a 65-0 victory over Ole Miss. That’s still the biggest margin of victory in the history of the two schools.

Just a year out of a college he became the head football coach at Mississippi College in 1916.
Now, here’s the part that is hard for so many to believe .
In 1917, Dudy Noble became the head football coach at The School Up North — yes, the University of Mississippi, Ole Miss.
Noble was the head football coach at Ole Miss for two seasons, the head basketball coach for one and the head baseball coach for two. For the record, Noble’s two Ole Miss football teams lost both times they played State.
Noble returned to his alma mater in 1919 and remained there for the next 40 years until his retirement in 1959. He was the athletic director from 1938 until he retired. His first love was baseball and his baseball teams won 277 games and lost 209.
Even though he spent two of the formative years of his coaching career at Ole Miss, he apparently left with no affinity for the his alma mater’s arch-rival.
Dudy Noble once told a Tennessee sports writer: “I already know what hell is like. I once coached at Ole Miss.”

Yes, and Noble once owned a bird dog, a lazy mutt that refused to hunt.
“Mr. Ole Miss,” Dudy Noble named him.