In this case, a good turn did inspire another 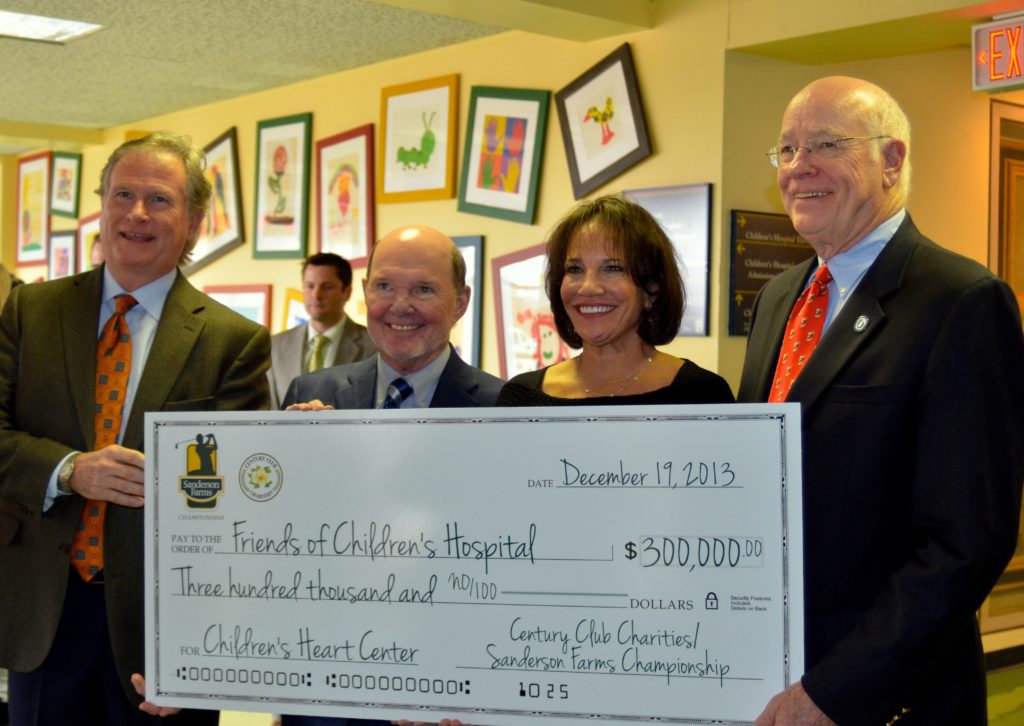 Pictured from left to right: John Lang, President of Century Club Charities; Joe Sanderson, CEO and Chairman of the Board of Sanderson Farms; Sara Ray, Chairman of the Board for Friend’s of Children’s Hospital; and Dr. James Keeton, Vice Chancellor for Health Affairs for the University of Mississippi Medical Center.

Mac Elliott and Joe Sanderson, each now 66, grew up about a half mile apart on Old Bay Springs Road in Laurel. They were pals. There must have been something magical in the water in that neighborhood. And we’ll get to that.

“I’ve known Joe Sanderson since I can remember remembering anything at all,” Elliott, who now lives in Madison, said. “We’re

old-line friends. His family, my family, we were all friends.”
They graduated high school together at Laurel High. Elliott headed for Ole Miss and Sanderson to Millsaps.
“Joe was always smarter than I was,” Elliott says, laughing.
That was 48 years ago. So let’s fast-forward to Thursday in the lobby of Blair E. Batson Children’s Hospital at University of Mississippi Medical Center.
Joe Sanderson, CEO of Sanderson Farms, was there to present a check for $300,000 to Century Charities, which would then hand it over to the hospital for its new Children’s Heart Center. Sanderson, you should know, is the man who built his family’s business into one of the leading chicken producers in the world. He is also the man who saved Mississippi’s PGA Tour tournament at Annandale.
Sanderson talked about what Blair E. Batson means to Mississippi and what the new heart clinic will mean for Mississippi children. The golf tournament exists to raise money for the children, he said.
“It’s our duty,” Sanderson said, matter-of-factly, yet in a way that made you want to stand up and cheer, especially when you saw critically ill children being wheeled down the hall.
“I want everyone to know our support does not end with this check today,” Sanderson said. “This is just the beginning.”
And then John Lang, the president of Century Club Charities, which has raised over $7.3 million since 1996 through its association with the annual PGA tournament at Annandale, stepped back to the microphone.
It was his job to end the press conference, but he discarded his prepared speech and, as he put it, “ad libbed.”
Lang told about a phone call he had the night before from Mac Elliott, Sanderson’s childhood friend from Old Bay Springs Road, where there really must have been something in the water.
Think about it. We’re talking about one street in one small Mississippi town. Sanderson became the CEO of a chicken manufacturing giant; Elliott became CEO of National Aviation Academy, which trains FAA-licensed pilots and mechanics and provides airplane maintenance nationally. His corporation has offices in Clearwater, Fla., and Bedford, Mass. He may not be, as he jokingly put it, as smart as Joe, but he has done pretty well himself.
Elliot called Lang — “out of the blue,” Lang said — Wednesday night and told him he had been inspired by what his buddy, Joe Sanderson, had done to save the golf tournament and raise the money for the children’s heart clinic.
He told Lang he was contributing $100,000 of his own money to bring this year’s contribution to $400,000. He told Lang he wanted his donation to be anonymous.
Lang told Elliott he’d do whatever Elliott wanted, but he wanted to make Elliot’s generosity public to inspire others.
“I just thought people should know,” Lang said, later. “And I hope Mac doesn’t get mad and that what he has done will inspire others to do the same. Not everyone can give $100,000, but a lot of us can do something.”
Said Elliott, “What the heck, if it inspires people to do more, then all the better. I do know what Joe Sanderson has done has inspired me. He stepped up, and he made me want to do more.”
Said Joe Sanderson Friday: “I’ve known Mac all my life, but I had no idea he was about to do what he did. That was so generous.”
“This is a win-win,” Elliott said. “I think having a PGA Tour tournament in Mississippi is important to the state and I know it is important for the children of Mississippi. What they are doing at Blair E. Batson is magnificent. It helps the whole state.”
•••
To support Blair E. Batson Children’s Hospital, click here.