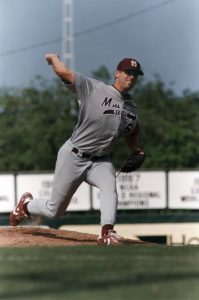 Jay Powell, former major leaguer and current head baseball coach at Jackson Academy, will be the keynote speaker at the May 21 Mississippi Sports Hall of Fame and Museum presentation of the 2018 C Spire Ferriss Trophy, which annually honors the state’s top college baseball player.

Powell, who was drafted by the Baltimore Orioles after his junior year at Mississippi State, played for the Florida Marlins, Houston Astros, Colorado Rockies and Texas Rangers before signing with the Atlanta Braves in 2005.  He was the winning pitcher of Game 7 of the 1997 World Series when Florida defeated the Cleveland Indians.

This is only the second time since the award’s inception 15 years ago that its namesake – Magnolia state baseball legend Dave “Boo” Ferriss – will not be attending the awards program. Ferriss, who passed away in 2016, is a Boston Red Sox Hall of Famer and former long-time Delta State baseball coach.

For only the fifth time in the history of the award, Mississippi baseball fans will have the opportunity to take part in the voting for the C Spire Ferriss Trophy.  Like the previous four years, fan voting will count for a weighted 10 percent of the overall award.  A panel of Major League Baseball scouts and Mississippi college baseball coaches have the remaining 90 percent of the vote and will determine the eventual winner.

“This gives fans a chance to play a part in helping identify our state’s best college baseball players,” said Bill Blackwell, executive director of the MSHOF and co-sponsor of the award along with C Spire.  “Major League Baseball and players and coaches have used fan voting to determine who plays in the All-Star game for years.   Giving our fans, who are some of the most passionate in sports, a voice in the process creates more interest in an award that has become an integral part of Mississippi college baseball tradition.”

Chosen by Major League Baseball scouts who cover Mississippi and by Mississippi’s college baseball coaches, the five finalists for the award will be named on Monday, May 14.  Fan voting will begin at 5 p.m. CT on Monday, May 14 and conclude on Saturday, May 19 at noon CT.

By visiting www.csopavoting.com, fans can register and vote for their favorite college baseball player by simply providing an email address, mobile number and name.  Once an account is created, fans can vote online at the website, via Twitter and text messaging, up to three times per day during the six-day voting period.

“College baseball fans across Mississippi are very passionate about their schools and the star players in their respective programs,” said Jim Richmond, vice president of Marketing for C Spire.  “Several schools are having outstanding seasons and we’re excited about continuing to give fans new opportunities to support their favorite players for the C Spire Ferriss Trophy.”

The eventual winner will be announced during the May 21 luncheon program at the MSHOF in Jackson.  Mississippi State outfielder Brent Rooker won the 2017 award, fellow MSU outfielder Jake Mangum won the 2016 award and  Southern Miss pitcher James McMahon won the 2015 trophy.

Advance tickets are on sale, including full tables seating 8 persons for $350 each along with reserved seating, half tables and individual tickets. For more information or to purchase tickets, call the MSHOF offices at 601-982-8264,  stop by at 1152 Lakeland Drive or  click here to purchase online.