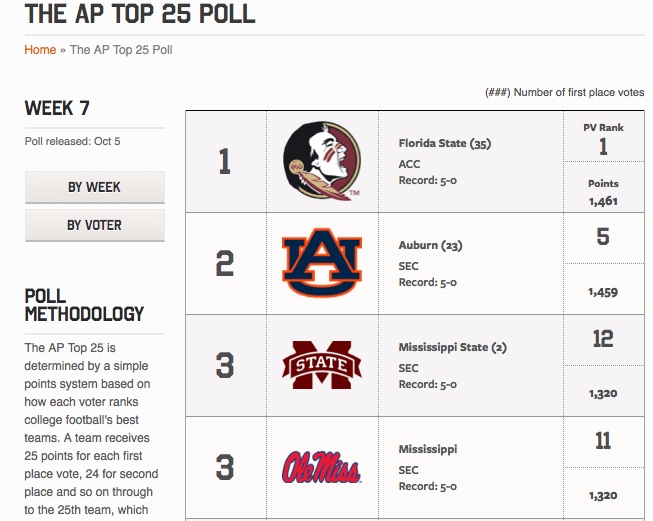 Look at it. Stare. Blink your eyes. Shake your head. Pinch yourself. OK, it’s still there. Well then, try to comprehend. We are five games in the 2014 college football season. Mississippi State and Ole Miss are tied for third in the U-S-A.
LSU, who had been in the Top 25 for 87 straight Associated Press football polls, is out. Mississippi State and Ole Miss, which had never, ever been in the top five together, are tied for third.
This isn’t a mirage. This is college football on LSD.
What were the odds? I mean, not only that they would be 5-0 five games into the season, but that they would each wind up with precisely 1,320 votes.
“I know, I couldn’t believe it myself,” Ralph Russo, the AP football writer who counts the votes, said Sunday night. “Ole Miss was slightly ahead and then the last vote came in. It was Brett McMurphy (ESPN College Football Insider) and he had State third and Ole Miss fourth. And there they were, tied.”
Said Russo, who did an eight-year stint as an AP sports writer in Jackson: “I think it’s kind of neat, really.”
I do, too.
Never mind that early-October polls mean little in the overall scheme of things. At season’s end, No. 3 on Oct. 6 will get you, well, nothing. But for these two schools, in this state, it matters in a different way. As in: “Hey look at us. We are relevant. We matter. We’re the Ole Miss Rebels and the Mississippi State Bulldogs, not the other way around.”
I can’t tell you how many times I’ve heard Ole Miss called the Bulldogs or State called the Rebels in the national media. Hell, Mississippi State advanced to the Final Four in 1996 and the NCAA, of all organizations, put Mississippi instead of Mississippi State, on the back of the baseball caps.
And was it CNN or The Weather Channel that called Mississippi “the land mass between New Orleans and Mobile.”
It’s Mississippi: M-I-crooked letter-crooked letter-I-crooked letter-crooked letter-I-humpback-humpback-I. The Rebels are in Oxford. The Bulldogs are in Starkville. Neither appreciates being called the other. Nobody appreciates being called a land mass.
Maybe, after this season, the rest of the nation will get it right. If this accomplishes nothing else…
Now then, to state the obvious: It’s going to be hard to stay there. Already, State is an underdog at home to Auburn. Ole Miss is an underdog on the road at Texas A & M, a team that State pummeled Saturday.
After A&M, which is a mouthful on the road, the Rebels still have Tennessee, LSU and Auburn to go in this murderous stretch. After Auburn, State’s schedule is more manageable except for that Nov. 15 road game at Tuscaloosa.
That’s all in the future. Let’s enjoy the week. Scroll back to the top and look at that poll.
Or scroll down and look at what’s next. 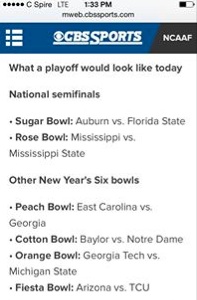 No, you couldn’t make it up.
And we didn’t have to.
Enjoy.
•••
New coffee table book will feature Hall of Famers. Click here.

3 responses to “Look what's happening in the old land mass”