Omaha was magical for Rusty Thoms

(What follows is a column I did on Rusty Thoms and his two-year run at the College World Series (1997-98). This column was actually written in 2007, on the occasion of State’s last visit to Omaha. Thoms, more than any player I ever covered at the CWS captured the essence of the event.)
June 13, 2007  (Courtesy of The Clarion-Ledger)
Mississippi State begins play in the College World Series on Friday night. These Bulldogs can only dream they will soak in anything near the Omaha experience Rusty Thoms enjoyed in 1997 and 1998.
Thoms, a little guy, was a solid college player -“a classic overachiever,” Ron Polk calls him – but Thoms made Omaha’s Rosenblatt Stadium his personal stage. For five days in 1998, he became baseball’s version of Elvis.
“Rusty was never drafted,”Polk said. “He played left field for us, but he didn’t have the power to play there in the pros, and he didn’t have the speed to play center, or the arm to play right field, and he just wasn’t an infielder. He was a line drive hitter who put the ball in play and used all the fields. He was a team leader and an honor student who always had a smile on his face.”
That’s all true, and none of it explains why many fans at Rosenblatt – not just Mississippi State fans, mind you – wore T-shirts that said, “I love Rusty.” Or why they chanted his name:”RUSTY! RUSTY! RUSTY!” Or why when he would return to his left field position, fans in the bleachers would bow down to him in unison as if he were some baseball god.
“It was,”says Thoms, now 32, “a magical experience. I think about it a lot, especially this time of the year.”
You would, too.
In fact, memories of the Thoms-Omaha phenomenon are such that it is my most indelible image of the three College World Series I’ve covered.
Groundwork laid in ’97
Thoms, a technology hardware sales representative, now lives in Madison where he is the father of 4- and 5-year-old tee-balling sons. He plans to spend Father’s Day with them but hopes to make it to Omaha next week if the Bulldogs are still playing.
If he does, so many ineffable memories are likely to surface. 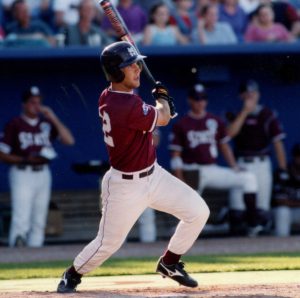 Thoms specialized in hitting to the opposite field.

“You know, it actually began in 1997, my junior year, when we went there,”Thoms says. “We were going to play our first game against Alabama, but the game before us, UCLA and Miami, went into extra innings. We were just trying to pass the time down behind the left-field stands.
“Fans were wrapped around the stadium, waiting for the first game to end so they could get in. We started talking to them, and one of them asked me if he could have my batting glove that had a Mississippi State emblem on it. We had all new stuff so I gave him and some other people my old ones. Turns out, those people wound up sitting in the left-field bleachers. It kind of snowballed from there.”
Thoms was a fan favorite before his first CWS game even began. And then, he gave those fans plenty to cheer.
When the Bulldogs returned in 1998, those same Rosenblatt fans were there in the left-field bleachers to greet Thoms. He wasted no time giving them a thrill. With two runners on in the second inning and Florida All-American Brad Wilkerson on the mound, Toms turned on a fastball and sent it into his fan club in the left field stands. When he returned to his position, fans in the left-field bleachers began bowing down to him.
The home run sparked the eighth-seeded Bulldogs to a stirring, 14-13 victory over the top-seeded Florida. Toms had hit only two home runs the entire season. Never in his Bulldogs career had he, a right-handed hitter, pulled a home run over the left-field fence. Talk about having a flair for the dramatic …
Mutual appreciation
Lynda Thoms, Rusty’s mother, remembers it all like it was yesterday. In 1998, she decided to go out to the left-field stands and see what it was all about. She took her camera and started taking photos of the fans in Rusty T-shirts, and the five fans with no shirts who had R-U-S-T-Y painted on their chests, and the fans bowing down to her son.
Someone saw the woman in maroon and white taking photos and asked who she was.
“I’m Rusty’s mother,” she said, and she became an instant star herself. Elvis’ mom.
“You have to remember that Rusty had played left field in front of the Left Field Lounge fans at Mississippi State,”Linda Thoms says. “He was used to interaction with fans. And I think he had come to terms with the fact that this was the last baseball he would ever play. He wanted to totally immerse himself in the entire experience and that’s what he did. I think he loved those people as much as they seemed to love him.”
In Thoms’ last baseball game, eventual national champion Southern Cal eliminated State 7-1, but Thoms had two hits and made two running, diving catches. The fans in left field went absolutely berserk after each hit and each catch.
A career .322 hitter, Thoms hit .429 in the 1998 CWS. He scored five runs and knocked in four more. He played splendidly in the field. And he soaked in every last moment.
After the final out, Rusty Thoms emerged from the Bulldogs’ dugout and began running toward the left-field seats.
“Everybody wondered what in the heck he was doing, but I knew,” Lynda Toms says. “Somehow, I just knew.”
Toms took off his sweat bands and threw them to the fans. He took his batting gloves out of his back pockets and tossed them. Then, he took off his cap and threw it. And, finally – just as his mama, crying, shouted, “No, not the glove” – he took off his fielding glove and heaved it into the stands, as well.
“You know all these years later, I still keep hoping we’ll go to the mailbox one day and that glove will be in the mail,”Lynda Toms says. “I’d love to have it for Rusty’s boys. But on the other hand, I don’t think Rusty would change a thing.”
And why should he?
••••
Support your Mississippi Sports Hall of Fame and Museum here.

4 responses to “Omaha was magical for Rusty Thoms”