Funeral services will be held Tuesday afternoon in Starkville for Mrs. Jean Hartley, whom sports writers and sportscasters around the Deep South long considered the First Lady of Mississippi State University.
Mrs. Hartley was 92 at the time of her death. She was the widow of Mississippi Sports Hall of Famer Bob Hartley, the long-time sports information director at State, who died in 1997.
“It’s hard to put into words what Bob and Jean Hartley meant to Mississippi State,” longtime MSU athletic director Larry Templeton said. “They were direct link between our university and all the media across the nation. They meant so much to so many. When Bob and Jean took you in, you were family.”
There will be a visitation at 1 p.m. at First Presbyterian Church in Starkville, followed by a 2 p.m. funeral.
Welch Funeral Home is handling the services. In lieu of flowers, the family asks that memorials be sent to either French Camp Academy or Palmer Home.
•••
What follows is a column Rick Cleveland wrote about Bob Hartley, which appeared in the August 27, 1997 Clarion-Ledger:
Think Mississippi State, and you think Scott Field, Humphrey Coliseum and Dudy Noble Field. You think Maroon and White, Bully, clanging cowbells and “Hail Dear Ol’ State.” You think Jeff Malone swishing a long one, D.D. Lewis making every tackle and Will Clark taking one deep.
You think about all that, and I do, too. But the truth is, you mention Mississippi State and my first thought is of Bob Hartley, the 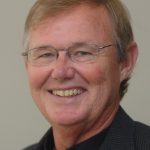 kind and gentle man who spent more than 50 years of his life making his Dear Ol’ State a better place.
Bob Hartley, “The Hart” and soul of Mississippi State athletics, died Wednesday morning at the age of 77. The funeral will be Friday, and there’s not a church in Mississippi big enough to hold his friends.
Hartley’s official title for most of his years at State was sports information director. He was a damned fine one, too. But he was much more, so much more than that at State. He was the constant. He was the glue.
Hartley was the one link between 11 State head football coaches, eight athletic directors and more athletes than we can count.
There were many dark and dreary times in State athletics during Hartley’s more than half century of service. But he was a shining light, providing even in the darkest of times a reason for sports writers to enjoy going back to Starkville.
He was a walking, talking encyclopedia of MSU sports. He knew everything. He knew everybody. And he tried his darnedest to make life a little easier, a little better for everyone he knew. He was loyal to his school and to his friends. He loved people.
He was a sports writer’s best friend.
The Bob Hartley Press Box at Scott Field seats 126 reporters and also contains 10 radio/TV and VIP booths. When Hartley first started working MSU football games as sports editor of the school paper in 1938, he did so from a card table on the sidelines.
That gives some idea of the vast change Hartley saw in college athletics, in the sports media and at Mississippi State. To Hartley’s credit, he not only adjusted to change, he helped to usher it in. Better than most in his field, he changed with the times.
He was able to do this, I think, because he understood that it doesn’t matter so much whether the work is being done on manual typewriters or computers. Nor does it matter whether you’re working on a card table in the rain or in a plush press box. What matters — all that really matters — is the people doing the work.
Hartley once told me as much. “It’s the people, the friendships that keep me going,” he said, as he was closing down the press box on still another long Saturday.
Hartley officially retired in 1985, but he never retired really. He kept writing, kept volunteering his time and expertise to the school he loved so dearly.
His column “From the Hart” was a popular feature in Dawgs Bite, a publication for MSU fans. His last column appears in the current issue dated Aug. 30, 1997.
“Most people retire to their hobbies,” Hartley once told me. “When I retired, I found out I had retired from my hobby. I couldn’t stay away.”
Wherever State played these last few years, you’d find Bob and and his wife, Jean. Jean drove the Cadillac; Bob rode shotgun. And wherever they headed, many friends awaited. More often than not, you had to wait in line for a press box visit with the Hartleys.
“Bob’s greatest strength was his love for people,” said State athletic director Larry Templeton. “He treated everybody the same, and he treated everybody with great respect.
“It made no difference whether he was dealing with the student newspaper or the columnist of The New York Times. He gave them the same courtesy, the same amount of effort.”
Wednesday’s news of Hartley’s death hit many of us hard. It hit Templeton harder than most.
Hartley, you see, gave Templeton his first part-time job as a statistician when Templeton was a high school junior. He gave Templeton his first full-time job — as assistant sports information director — when Templeton graduated from State.
“There wasn’t money for a full-time position, so Bob talked Charley Shira (then the athletic director) into paying me out of petty cash,” Templeton said.
A year later, Shira still didn’t have the budget for a sports information assistant, so Hartley talked him into hiring Templeton in the dual position of golf coach and assistant sports information director.
“He was the reason I got the job,” Templeton said. “. . . He’s also a lot of the reason I’m the athletic director today.
“Bob Hartley was a very special person,” Templeton said, his voice cracking. “He touched the lives of so many. All of us in college athletics lost a great friend today. I lost my best friend.”
•••
To support your Mississippi Sports Hall of Fame and Museum, click here.