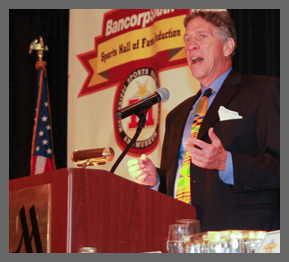 Nearly 500 banquet attendees stood Friday night and applauded as Ted Rubenstein handed Boo Ferriss the first ever “The Rube,” an award named in honor of Ted’s brother, the late Michael Rubenstein.
Moments later, the same 500 attendees stood and applauded again when it was announced that the Rubenstein family has given a $150,000 gift to the Mississippi Sports Hall of Fame and Museum. The donation, $25,000 per year over six years, is the largest private donation in the museum’s 16-year history.
“Nobody knew better than Michael how much that money means to this museum,” Rick Cleveland, the museum’s new executive director said. “On behalf of the board of directors, Ted, I will personally guarantee this money will be used in a way that Michael would approve and in a way that will make our museum, and Mississippi, a better place, just as Michael has.”
When asked about the gift, Ted Rubenstein said simply, “It is what Michael would have wanted. This was his baby. He loved this place.”

Michael Rubenstein, who died Dec. 1, 2011, was a Booneville native and Vanderbilt graduated who was Mississippi’s most popular sports anchor before taking the reins of the Sports Hall of Fame in 1996.
“Nobody knows more than I how big the shoes are I am trying to fill,” Cleveland said. “But I’ll tell you this much, Ted’s generosity, on behalf of Michael, is going to make me a much better executive director.
“As Michael never failed to say, we operate this splendid museum without a single thin dime of tax money from any level of government,” Cleveland continued. “Generous corporate support and private donations — both large and small — are what keep our doors open.”
Said Ferriss, the former Boston Red Sox baseball star and Delta State baseball coach, “I an overwhelmed to be the first winner of this award named after a man I thought so much of. I am also overwhelmed at the size of this donation. It just made the night that much more special.”