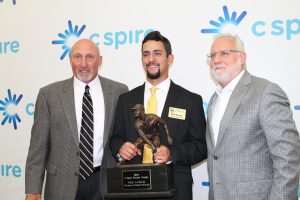 Switched to a starting role this season by Coach Scott Berry, Sandlin responded with a great year.  In 13 games he compiled an 8-0 record with a miniscule 1.25 earned run average.  He tossed two complete game shutouts and allowed only 47 hits in 86.1 innings.  His control was impeccable striking out 122 batters while walking only 14.

The side-armer becomes the 15th winner of the C Spire Ferriss Trophy which goes to the state’s Most Outstanding College baseball player.  He is the third winner for the Golden Eagles joining Tyler Koelling in 2011 and James McMahon in 2015.  The Eagles start the Conference USA tournament in Biloxi this week with an overall 39-15 mark.

The fan vote sponsored by C Spire was won by Ole Miss’s Olenek.  Over 11,000 votes were cast during the week long balloting.