Posted on: February 23,2014
This was my last week’s newspaper column, which is syndicated through the Mississippi Press Association. Since this was written, Victoria Vivians has led Scott Central to a district championship and broken (unofficially, unfortunately) the national high school scoring record. We all know: She scored the points!
Something interesting happened last month when Scott Central’s Victoria Vivians set the Mississippi all-time high school scoring record, scoring 41 points in a game against Union to go well over 5,000 points in her career.
That’s right: 5,000.
Here’s what happened: I wrote a column for our msfame.liquidcreative.net, documenting Vivians’ achievement and the fact that Scott Central and Vivians had donated the record-breaking ball to the Mississippi Sports Hall of Fame and Museum.
Almost immediately, the tweets and e-mails started arriving, most saying something like this: “Yeah, but look at the competition she was playing against.” 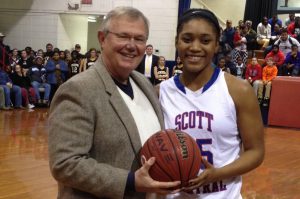 True, Class 2A is the second smallest of Mississippi’s public school athletic classifications, but Scott Central often schedules up in class. Anyway, Vivians scored the 41, four under her average, on a Friday night.
The next night, playing against 6A powerhouse Tupelo, and despite often being double- and triple-teamed, she went for 60. That’s right: sixty. She can score against anybody.
Vivians has continued her onslaught on the record books since then — this, despite the fact, Chad Harrison, her coach, often sits her when Scott Central takes a big lead against an inferior opponent.
Still, she doesn’t get the credit she deserves. And I’m not talking about tweets and e-mails here. Somehow or another, the group that selects McDonald’s All-Americans left Vivians off the list — this, despite the fact she now ranks second in the nation in scoring at 46 points per game.
Apparently, a 23-person committee — made up of reporters, analysts and coaches — selects players for the McDonald’s honor. One wonders if these are the same people who write the copy for The Weather Channel and can’t figure out Mississippi — “the land mass between New Orleans and Mobile” — exists.
I mean: How do you overlook 46 points per game and well over 5,000 points in a career?
There’s more, sometime this week or next, Vivians, who will play collegiately at Mississippi State, will become the all-time national high school CAREER scoring leader.
She will score more points than any female player has ever scored in U.S. high school basketball. And yet the National Federation of High Schools (NFHS) will not recognize that feat because Victoria scored 573 of her points as an eighth grader. The NFHS recognizes only points scored from the ninth grade through the 12th.
Now then, you tell me, if a player is good enough to play varsity basketball in the eighth grade, shouldn’t her points count?
You don’t have to answer. It’s common sense. The points counted in those games; they should count in the record books.
Thankfully, Vivians and Scott Central avoided the ultimate insult. For the longest time it appeared Scott Central would be banned from the state playoffs because Scott County Schools officials had blundered, causing the county’s schools to face state takeover. (In cases of state takeover, students’ extracurricular activities are severely limited. Of course, in most cases takeover is caused by poor academic performance — not so in Scott County.)
Thankfully, common sense did prevail. The school officials who caused the problems resigned. Scott Central will begin district play this week. If all goes as expected, Vivians will close out her high school career in the State Tournament at the Mississippi Coliseum, shooting for a third state championship in four years.
It’s not a given, but it is expected. And fans should have one last chance to watch the greatest girls basketball player this land mass has ever produced compete at the high school level.
•••
To support your Mississippi Sports Hall of Fame and Museum, click here.

2 responses to “Victoria Vivians: the legend grows and grows”