Wallace 'Gator' McMillan: A Hall of Fame guy and teammate 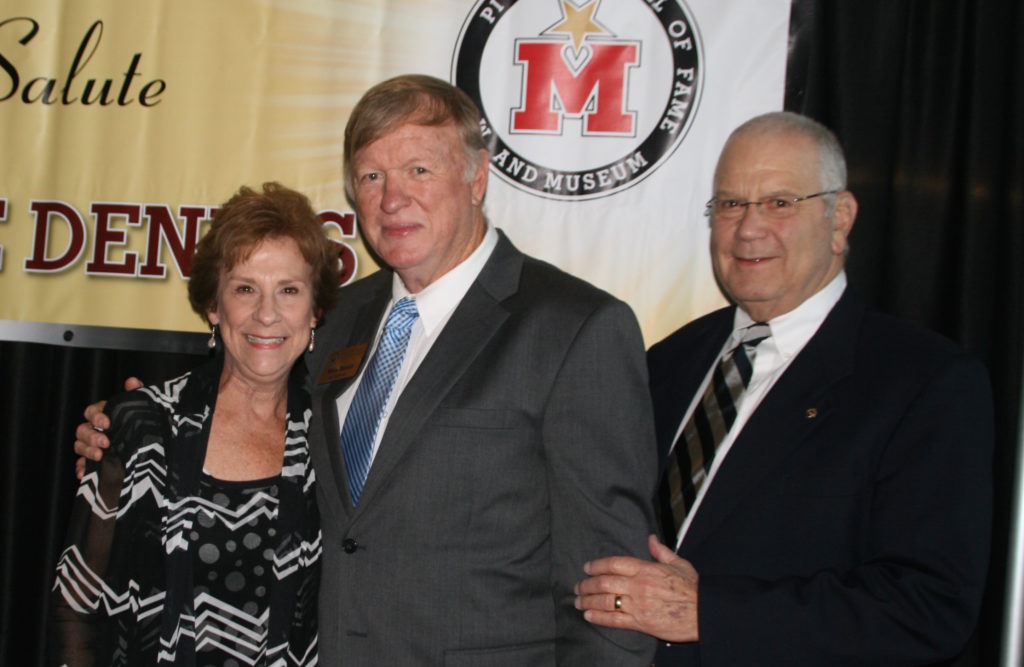 Wallace McMillan (far right) and his wife, Sarah, with Mike Dennis at his induction into the Mississippi Sports Hall of Fame. (Photo courtesy of Sara Running)

This writer, along with several hundred more, Monday attended the funeral of Wallace “Gator” McMillan at Northminster Baptist Church in northeast Jackson. It was, as funerals should be, a celebration of Wallace’s life.
When Judge Rhesa Barksdale delivered the eulogy, smiles out-numbered tears and there was plenty laughter, as well, which is just as Wallace would have wanted. Of Wallace’s many qualities, this first one comes to mind: Without fail, he made me laugh.
The huge crowd? As Wallace’s, older brother Howard “Scooter” McMillan, put it: “Everybody felt like they were Wallace’s best friend.”
I’ve known Wallace, who was 70, for decades, but we have become better friends just in recent years. Wallace and his old Murrah football teammates from the early ’60s, were kind enough to include me in their frequent lunches and other gatherings. I had at least as much fun as they.
In retrospect, I wish current high school athletes could attend some of those lunches just to learn all there is to gain — other than yards and victories — from high school sports. Those Murrah guys love one another like brothers and they love their coach, Hall of Famer Jack Carlisle, much like a second father.
Those who attended this summer’s Mississippi Sports Hall of Fame induction saw the camaraderie first-hand. Mike Dennis, long overdue, was inducted and his former Murrah teammates made up much of the record banquet crowd. Wallace was right in the middle of it, beaming in his dark blue suit with a blue and silver  (Murrah colors) tie.
I don’t think Wallace, a former Hall of Fame Board of Directors member, could have been much more proud had he gone into the Hall of Fame himself.
At Murrah, Wallace was a junior when Dennis was a senior. In fact, Wallace a big, strapping lineman, was one of two non-senior starters on the team that finished 8-0-2 in the regular season and won the North Big Eight Conference.
“Coach Carlisle wasn’t happy with us after we tied our first game at Gulfport and he was trying to make a point in practice,” Dennis said. “He gave me the ball and told me to run straight up into the line and I ran helmet-to-helmet into Gator. Well, his face mask went under my face mask and knocked out one tooth and left two more hanging.”
Dennis, the future dentist, had to have oral surgery and played with his mouth wired together for the next couple weeks. McMillan? He claimed credit for Mike Dennis later becoming a dentist.
Said Dennis, “There’s probably some truth to that.”
When Carlisle lost all those seniors from the 1961 team, the cupboard was relatively bare in 1962. The Mustangs won two, lost three and tied five, which Gator McMillan always claimed to be “a national record for ties.”
It might have been.
That team’s claim to fame was tying an otherwise perfect Meridian team 6-6 at Meridian. We should let Jack Carlisle tell that story.
“We scored early to go ahead 6-0 and missed the extra point,” Carlisle said. “They scored late to tie it and lined up to kick the extra point. I had noticed that their placekicker was not a regular football player and only came in for kicks. I don’t think he much wanted to be out there at all. I thought he might be a little skittish.
“I told Wallace not to wait for the snap, to just bust into the center before the play started to get that kicker’s attention. Well, sure enough, Wallace knocked that center into next week and back into the kicker, too. That kid ran off the field and they penalized us half the distance to the goal. Meridian tried to run the extra point instead. They only had to make a yard so they ran it right up the middle. We stopped them and Gator was in on the tackle. We weren’t very good that year but we tied the best team in the state. Man oh man, Gator loved to tell that story.”
Yes, he did. I heard him tell it and revel in it. The man could tell a story. As his obituary said: “Wallace was a gentle giant with an outgoing and entertaining personality. Because of his loving nature, keen wit, and his unwavering sense of loyalty, he made numerous friends from all walks of life. He never met a stranger and had an uncanny ability to fill any room with smiles and laughter with his animated story telling.”
Perfect description. Gator McMillan was also, say both Dennis and Carlisle, one heck of a high school football player who could have played on in college had he so chosen.
“Ole Miss offered him, and Bruiser Kinard wanted him bad,” Carlisle said. “He could have played. I don’t think his mother much wanted him to.”
We will never know how Gator would have done on the field at Ole Miss. We do know this: He would have been one hell of a teammate.
•••
To support your Mississippi Sports Hall of Fame and Museum, click here.

2 responses to “Wallace 'Gator' McMillan: A Hall of Fame guy and teammate”