the BancorpSouth Mississippi Sports Hall of Fame Induction Banquet.
Two folks who would have been with us will not be. Hall of Famers Bobby Crespino and George “Boomer” Scott — two men with Greenville backgrounds — died earlier this week. They will be sorely missed: Bobby’s always kind, gentlemanly manner and George’s booming laugh.
In fact, we have lost six Hall of Famers — add Doug Kenna, Marion Henley, P.W. Underwood, Dorothy Vest — since last year’s banquet. All will be missed.
My point today when we honor six Mississippi greats: The deaths of Crespino, Scott and the others serves as a stark reminder of the importance of your Mississippi Sports Hall of Fame and Museum. Here, just off Lakeland Avenue, on Cool Papa Bell Drive, their legends will live forever.
You can come to our museum and watch the Boomer hit some of his “taters” and talk about them. You can hear Bobby Crespino talk about the glory years at Ole Miss and the NFL and watch him go over the middle to catch a pass.
You can hear P.W. Underwood talk about the day his 50-point underdog Southern Miss team knocked off Archie and Ole Miss and his players carried him to midfield and dropped him at John Vaught’s feet. “Hell, P.W. you couldn’t expect two miracles in one day,” Vaught said.
All those stories — and literally thousands more — are preserved for the ages at your Hall of Fame and Museum. They are preserved on new, high definition touchscreen kiosks added in the past year. You can spend days on those kiosks and not see all the stories. My little secret: When I’m having a bad day, I go to the nearest kiosk, punch up Robert “Ace” Cleveland and listen to my dad, gone now for 17 years, tell a story. I feel better instantly.
We have so much going on at your museum. I say your museum because that’s what it is, Mississippians’ sports museum, a Magnolia State treasure.
We have installed a new entrance exhibit that each year will feature our newest class of inductees. Our Olympic Room has been renovated. We’ve added three new 80-inch high definition TV screens, including one in the scoreboard facing our mezzanine level and stadium seating.
Our exterior will be cleaned and repainted beginning August 5. We are getting a badly needed new roof. We have a new air conditioning system.
Soon, a $700,000 indoor facelift will begin that will include a badly needed storage addition, new paint, an enhanced gift shop, new lighting and new carpet. Sanderson Farms will update and sponsor our PGA golf exhibit. Our parking lot has been repaved and striped.
All that said, so much more is needed, including an update of our theatre presentation, which was produced in 1996.
We operate in a state-owned building and the state is helping us with the bricks and mortar improvements. In other words, the state is fixing its building. But we still operate on our own dime. As my predecessor Michael Rubenstein, who will be inducted tonight, always said: “We have not received one red penny of your tax money for operating expenses.”
We still have not.
While sports museums in other states have closed their doors, we remain open, through corporate support (such as BancorpSouth’s this weekend), through museum and meeting room rentals, through the support of individuals and through the fund-raising events we put on throughout the year with a small, incredibly dedicated staff and some wonderful volunteers.
We tell a splendid, uplifting story, and we add a few chapters tonight.
•••
How can you help? Become a member here.
••• 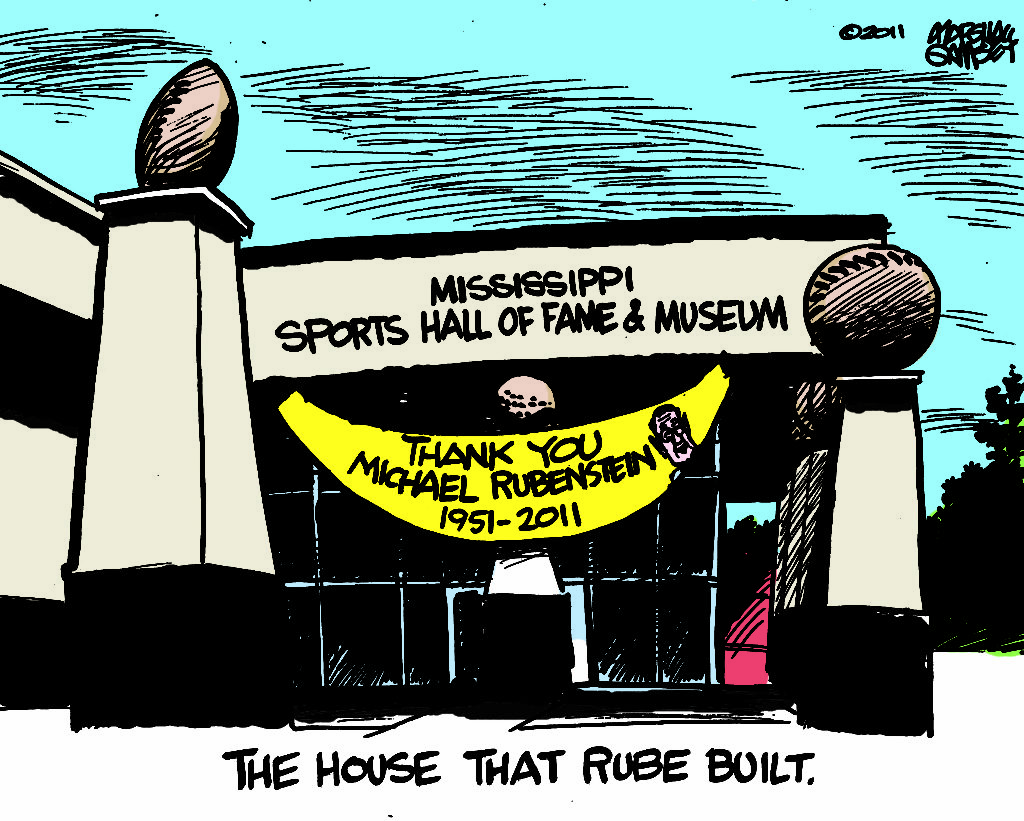 3 responses to “We celebrate new Famers, mourn those lost”