You couldn't make these Braves up….

So, let’s see, Atlanta Braves second baseman (Dan Uggla), can’t hit and the Braves hope it’s because he can’t see. He’s on the DL for eye surgery.
Tyler Pastornicky, who was brought up to replace him, tore an ACL and is out for the season.
Tim Hudson, the best and most experienced pitcher, is out for the season with a fractured right ankle. 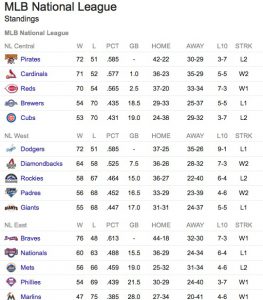 The Braves started the season without their catcher Brian McCann, who was coming off shoulder surgery. They immediately lost their best set-up man Jonny Venters to elbow problems on his throwing arm. Another reliever Christhian Martinez went out with a right shoulder strain. Eric O’Flaherty, a dependable lefty out of the bullpen, underwent Tommy John surgery.
And still another reliever, Luis Ayala, spent 15 days on the DL with an anxiety disorder, not a good thing for a relief pitcher to have, I’d say.
Sometimes, the Braves clubhouse seems more like an old folks home than a baseball locker room. Jason Heyward went on the DL to have an appendectomy, Gerald Laird for a kidney stone, Reed Johnson for tendinitis, B.J. Upton for an abductor strain, Evan Gattis for an oblique strain and Ramiro Pena for a right shoulder impingement. You couldn’t make all this up. Paul Maholm, the former State ace, was on the DL with a bruised left wrist.
Uggla and B.J. Upton are both hitting .186. That’s two starters well below the Mendoza line. Uggla has struck out 146 times, compared to hitting safely 72 times. At least for the skinny B.J., he is hitting one pound above his weight. Uggla is at least 20 points below his pounds.
The Braves, as a team, have struck out a National League high 1,063 times. The Upton brothers have combined for 246 of those.
Yes, and the Braves are now 76-48, lead the Washington Nationals by 15.5 games and have the best record in baseball.
Go figure.

One response to “You couldn't make these Braves up….”