You couldn't make up these Mississippi feats

Greatest single athletic feat in Mississippi history?
In 1960, Laurel’s Ralph Boston broke Jesse Owens’ last world record with a long jump of 26 feet, 11 and ¼ inches. Furthermore, Boston broke his own record five times over the next five years.
That’s definitely on the list.
On July 3, 1983, Bolton’s Calvin Smith covered 100 meters in 9.93 seconds, a world record. How many human beings, Mississippians or otherwise, can call themselves the world’s fastest human? The unassuming Smith, who will be inducted into the Mississippi Sports Hall of Fame in late July, could. And he did it without a hint of any performance enhancers.
Surely, Smith’s feat is on the list.
And while we’re on the subject of fast guys, Starkville’s legendary Cool Papa Bell reportedly flipped the light switch and made it under his bed covers before the room became dark. Unfortunately, that athletic feat is unconfirmed.
In 1945, rookie Boo Ferriss beat every other American League team during his first eight Major League starts. That feat is confirmed. Think about it.
Willie Mitchell, pitching for Mississippi State in 1909, fired a perfect game and struck out 26 of 27 LSU Tigers. Definitely on the list.
Ray Guy, punting for Southern Miss, booted a 93-yard punt that traveled more than 120 yards before it hit a fence. Guy also kicked a 61-yard field goal in a snowstorm.
Walter Payton, as a senior at Jackson State reportedly hand-standed a 40-yard dash for NFL scouts. No time was reported, but I think we can safely say, whatever the time was, it was a world record.
Jerry Rice caught 24 passes in a college football game.
Simpson County’s Brooks Baldwin, competing in a long drive contest, clobbered a golf ball 454 yards. That’s off the charts and on the list.
Obviously, we are an athletic state. So, how to choose the single most outstanding feat from so many that are so outrageous?
Before you try, allow the submission of one more feat for your consideration. 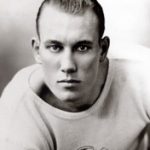 The year was 1937. Frank “Bruiser” Kinard was a football All-American at Ole Miss, widely considered the greatest lineman of his era, both in college football and later in the pros. A member of both the college and pro football halls of fame, the great Bruiser is a charter member of the Mississippi Sports Hall of Fame.
Bruiser was usually the biggest guy on the field and also the fastest and most athletic — as was shown when he lined up to kick the ball off for the Rebels in a game against Ouachita (Arkansas) College. The great Bruiser kicked the ball over the heads of the Ouachita return men, then he out-raced them into the end zone to recover the ball for a touchdown. It happened. It really did. Bruiser Kinard recovered his own kickoff for a touchdown, which puts him at the top of today’s list — and one impressive list it is.

To support your Mississippi Sports Hall of Fame and Museum, click here.