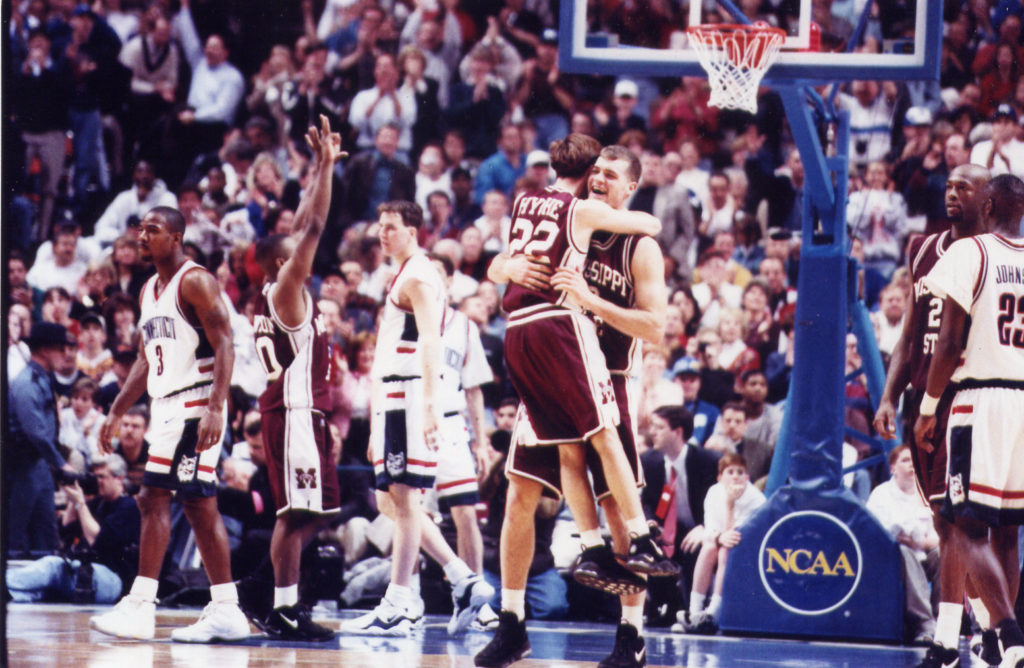 When Mississippi State defeated Cincinnati to go to the Final Four, Bart Hyche jumped into the arms of teammate Russell Walters.

In all, 304 basketball teams have participated in the NCAA Final Four that began in 1939. Only one of those 304 has been from Mississippi: The 1995-96 Mississippi State Bulldogs.
Those Final Four Bulldogs will be celebrated March 31, two days before this year’s Final Four, at the Mississippi Sports Hall of Fame and Museum. Hall of Fame coach Richard Williams and his Bulldogs will reunite for a 20th anniversary reception, dinner and program: Farm Bureau Salutes the 1996 Final Four Dogs.

“It really doesn’t seem like it’s been 20 years because somebody brings it up almost every day,” Williams said. “I see a lot of the guys often, but I’m really looking forward to getting back together as a team.”
Those Bulldogs began their amazing run by defeating eventual national champion Kentucky for the SEC Tournament Championship at the Louisiana Superdome. The No. 5-seeded Bulldogs then defeated Virginia Commonwealth 58-51, Princeton 63-41, No. 1 seed Connecticut 60-55 and No. 2 seed Cincinnati 73-63. The first two rounds were at the RCA Dome in Indianapolis and the Regional was held at Rupp Arena in Lexington. The Bulldogs were big underdogs to both Connecticut and Cincinnati.
The Bulldogs moved on to the Final Four at The Meadowlands where they were defeated by Syracuse 77-69.
Nevertheless, the Bulldogs were one of the great rags-to-riches stories in Final Four history. This was a team that was replacing three starters, lost an early season game at home to Arkansas-Little Rock, and then lost four of its first seven conference games.
The Bulldogs won 15 of their last 18, including eight of their last nine.
The team was built around 6-foot, 11-inch center Erick Dampier, who averaged 14.5 points, 9.3 rebounds and three blocked shots a game. Shooting guard Darryl Wilson led the Bulldogs with 18 points per game. Forward Dontae Jones was the wild card, averaging 14.7 points per game, but he could score in bunches. Point guard Marcus Bullard and power forward Russell Walters completed the starting lineup. Sophomore Whit Hughes and freshmen Bart Hyche and Tyrone Washington were big off the bench.
The March 31 event will begin with a 5:30 reception, followed by a 7 p.m. dinner and program. Farm Bureau is the title sponsor. Wier Boerner Allin Architecture is the presenting sponsor.
For ticket or table sponsorship information, call 601-982-8264.
Click Here for Order Form
Order Tickets Online Here