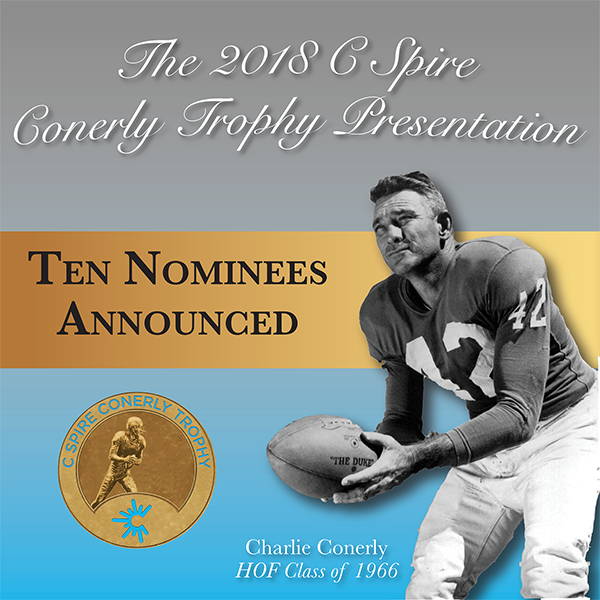 Jackson, MS – The ten nominees for the 23rd annual C Spire Conerly Trophy, which goes to the most outstanding college football player in Mississippi, were announced today.
Players are chosen by their respective schools and a combination of votes from the C Spire fan voting and a poll of sports news media representatives who cover the games determine the winner. A.J. Brown, the 2017 winner and a semifinalist for the Biletnikoff Award, has a chance to join Mississippi State’s Dak Prescott and Ole Miss alum Eli Manning as the only two-time winners of the award.
Named after College Football Hall of Famer Charlie Conerly, the Clarksdale native who starred for Ole Miss and the New York Football Giants, the trophy was first conferred in 1996. This year’s banquet is being held on Tuesday, Nov. 27 at the Country Club of Jackson beginning at 5:30 p.m. with a reception and a 6:30 p.m. program. Proceeds benefit the Mississippi Sports Hall of Fame and Museum.
Fan voting begins at 5 p.m. today and continues through noon on Sunday, Nov. 25. Voters go to www.cspire.com/Conerly and may vote up to three times per day for their favorite player from their email address.
Here are the 2018 nominees, listed alphabetically, by school:
Alcorn State University – Junior quarterback Noah Johnson is the Braves nominee. He leads the team in both passing and rushing. He has accounted for 21 touchdowns, 14 passing and 7 rushing. Alcorn was leading the SWAC with a 5-1 record coming into this past weekend.
Belhaven University – Jr. Linebacker Denarrius Noel represents the Belhaven Blazers. This 3- year starter made 70 tackles, recorded 2.5 sacks and made 10.5 tackles for losses. He also recorded a team-high 3.80 GPA
Delta State University – Gulf South Conference co-offensive freshman of the year Statesman quarterback Patrick Shegog is the Delta State nominee. Shegog played in 10 games and started eight. He totaled 203 yards rushing and 90 yards passing with 2 TD’s vs. Mississippi College.
Jackson State University – Senior place kicker and punter Christian Jacquemin represents the Blue Bengals. Jacquemin is a two-time SWAC Specialist of the Week. He has converted 15 of 17 field goal attempts and averages almost 42 yards per punt.
Millsaps College – Inside Linebacker, Senior Chandler Coleman was chosen by the Millsaps staff to represent the school. His 6.5 sacks are tied for the 4th best in the SAA conference and his 14.5 tackles for a loss rank 5th. He is in the top ten in the loop for both total tackles and tackles per game.
Mississippi College – Running back Tiberias Lampkin is the Choctaw nominee. The senior averaged 5.4 yards per carry and 77 yards per game. He ran for over 100 yards three different games and had a season high 126 yards vs. Florida Tech. Against rival Delta State he had 117 yards and a touchdown.
Mississippi State University – Pre-season All-American defensive tackle Jeffery Simmons represents the Bulldogs. Entering this past weekend, Simmons had 48 tackles, 11.5 tackles for loss, 20 pressures, 4 QB hits and 15 QB hurries. He is a semifinalist for the Bednarik Award for the second straight year.
Mississippi Valley State– Receiver/Running back Booker Chambers is the Valley State nominee. The versatile back averaged 8.6 yards per carry and ran for 3 TD1s, caught 41 passes for 530 yards and 3 TD’s, and averaged 23 yards per punt return and 25.3 yards on kickoff returns for 2 more TD’s.
University of Mississippi – 2017 C Spire Conerly Trophy winner A.J. Brown is the nominee for the Rebels. Brown is closing in on all-time receiving honors at Ole Miss in just three years. This season he has caught 72 passes and averaged 104.7 yards per game and scored 5 TD’s as the team travels to Vanderbilt.
University of Southern Mississippi – Redshirt sophomore Quez Watkins, a wide receiver for Jay Hopson’s club is the representative for the Golden Eagles. In 9 games Quez rushed for an average of 3.3 yards per carry, averaged 12.4 yards per catch on 58 receptions and totaled an average of 106.8 all-purpose yards per game.
The keynote speaker for this year’s event will be Deuce McAllister. A graduate of Morton High School, Ole Miss and an NFL legend with the New Orleans Saints, McAllister now serves as the analyst for Saints radio broadcasts. Deuce will bring a perspective to the evening having been chosen as the 1999 winner of the C Spire Conerly Trophy.
Tickets for the banquet are on sale now at the Hall of Fame office and online here. Advance tickets are required and no sales will be available at the doors.