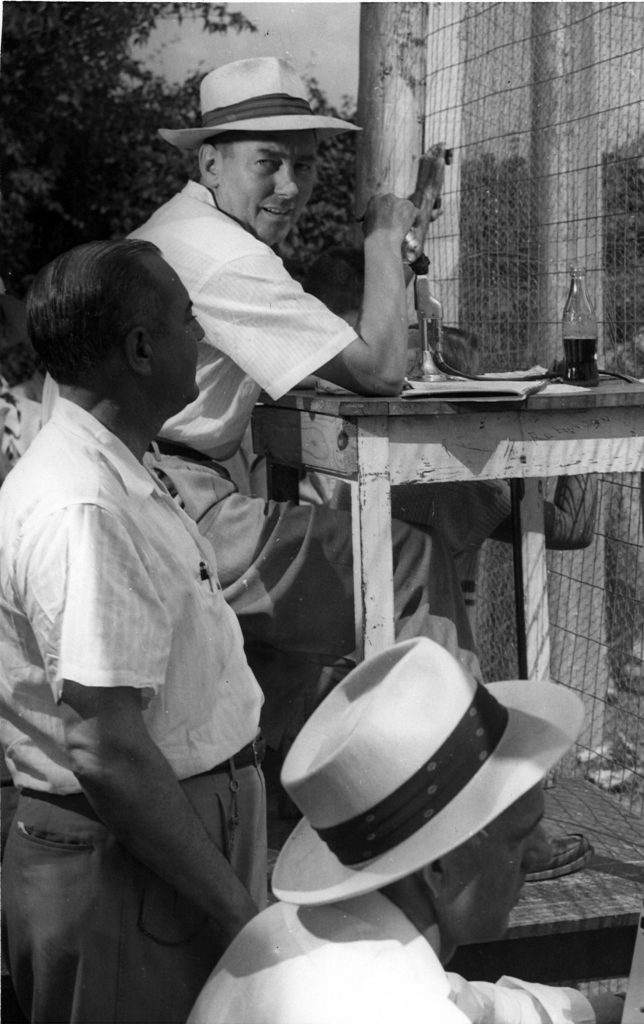 Who is the guy covering his microphone? We’re glad you asked. While searching for photos of Mississippi Sports Hall of Fame media inductees, we found this one of 2005 inductee Bill Goodrich, whose broadcasting career included stints at both Ole Miss and Southern Miss. What many might not know is that Goodrich was a war hero, having participated in the D Day invasion. He was wounded twice in World War II, receiving two Purple Hearts and the Presidential Citation. Goodrich got his start in sports broadcasting doing the high school games of Jackson Central and later first uttered his trademark phrase — “Whew Whew Mercy!” while broadcasting the old Jackson Senators games at the State Fairgrounds, where we believe this photo was taken. Goodrich died in 1999 nearing the age of 85.

This is the obibutary I wrote of Bill Goodrich in 1999:

Bill Goodrich, the colorful sports announcer who made “whew-hoo mercy” household words in Mississippi, died Wednesday of heart failure at St. Dominic’s Hospital. He was 84.
Goodrich used that trademark exclamation to describe home runs for the old Jackson Senators and touchdowns for the Ole Miss Rebels and Southern Mississippi Golden Eagles. He described touchdown runs by Jake Gibbs in one era and Reggie Collier in another.
“Whew-hoo mercy, that was him. Bill was a little guy with a big heart,” said Eddie Crawford, long-time Ole Miss coach and administrator. “The thing I’ll always remember about him is the enthusiasm he had for every game. He was super-positive. His enthusiasm was unbelievable.”
Goodrich began his career in Mississippi broadcasting in June of 1947. He did play-by-play for Jackson Central, plus minor league baseball for the Jackson Senators of the old Southeastern League. The Senators home games were done live, and Goodrich re-created the road games from Western Union tapes.
John Cox, the current USM play-by-play announcer, said Goodrich used to tell a story about one of those times he was re-creating a game, using a Western Union feed.
“The tape machine went down and stayed down for 17 minutes,” Cox said. “Bill said that he killed time by describing a dog running onto the field. He told about the umpires and the managers and the players trying to catch the dog. He had them falling down and everything. Finally, when the tape machine came back on, the message came across that the game was being delayed. There was a dog on the field.”
Later, Goodrich broadcast Hinds Junior College football and basketball (1949-52). He went to Spartanburg, S.C., in 1952 to become the voice of Wofford College and the Cleveland Indians’ minor league team based there.
From 1958 until 1965 he was the sports director of WLBT-TV and handled the play-by-play of Ole Miss football.
Former Ole Miss and Saints great Archie Manning said he grew up listening to Goodrich do Ole Miss games.
“I used to sit by the radio and listen on many Saturdays,” Manning said. “When the Saints trained in Hattiesburg in the ’70s, we got to be good friends. He was a great guy and fun to listen to.”
Goodrich left WLBT and moved back to South Carolina, where he did Clemson football and basketball until 1969.
He then became the television voice of the Kentucky Colonels of the old American Basketball Association and at the same time was televising road games of the University of Louisville.
He was out or radio and TV for six months before joining radio station WFOR of Hattiesburg in September of 1972, when he began doing USM football, basketball and baseball games.
He became a member of the USM public relations department in 1974 and remained until the fall of 1982.
“I owe my career to Bill Goodrich,” Cox said.
“When I was a student at USM, he took me under his wing and let me be a part of his broadcasts. He’s another one of the legends who helped make this place.”
Goodrich, a Pennsylvania native, grew up in Fond-du-Lac, Wisc. In 1932, he entered the University of Wisconsin on a boxing scholarship.
After college, he enlisted in the U.S. Army. A first lieutenant, he participated in the D-Day invasion and was wounded twice, earning two Purple Heart medals, the Bronze Star, the Silver Star and a Presidential Citation.
Bill Goodrich is survived by his sons, Page Goodrich of Jackson and Jeff Goodrich of Scottsdale, Ariz., and sisters Katherine Ours of Campbellsport, Wisc., and Jenny Wehrenbert of Menassha, Wisc.
Private funeral services will be held Saturday in Louisville. Visitation will be held Friday night from 6 p.m. until 8 p.m. at Porter Funeral Home in Louisville. Memorials may be made to the Lottie Moon Offering or the American Heart Association.

To donate to your Mississippi Sports hall of Fame click here: https://msfame.liquidcreative.net/donate/

One response to “Whew Whew Mercy, it's Bill Goodrich!”