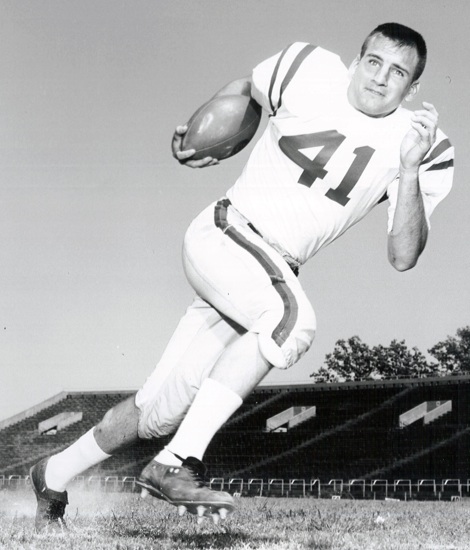 Charlie Flowers would run right over you.

The great Charlie Flowers, who was 77, died in his sleep last night after a long illness. Flowers was the best

player and the unquestioned leader of the greatest team in Mississippi football  history, the 1959 Ole Miss Rebels. My syndicated column this week in Mississippi newspapers will be about Charlie, whom I considered a good friend. Here is a column I wrote about Flowers when he was inducted into the College Football Hall of Fame in 1997.
The numbers are staggering.
The 1959 Ole Miss Rebels won 10 games, including the Sugar Bowl. They shut out eight of 11 foes. They allowed only three touchdowns all season, and not one came on a sustained drive. They outscored opponents by 350 to 21. They didn’t just beat teams; they mauled them.
“Most games I spent the entire second half begging Coach (John) Vaught to let the starters go back in the game for a few minutes,” says Charlie Flowers, the team’s All-America fullback.
Flowers, newly elected to the College Football Hall of Fame, has heard all those numbers countless times over the last 37 years. At 59, he can recite them to you if you ask him.
But those aren’t the numbers he’ll leave you with — or the numbers he’s proudest of.
“I’ve got the team picture from that season. There’s 43 players in it,” Flowers says by phone from his Atlanta home. “Of the 45

Charlie Flowers, at the time of his induction into the College Football Hall of Fame.

players on that team, 42 of us graduated. Forty-two of 43.
“I look at that picture and I see two future doctors, five future lawyers, the future chancellor of the university, the future athletic director, the future football coach, the future mayor of a town, three school superintendents and so many successful businessmen,” Flowers says, then pauses to catch his breath. “We were students playing football. We went there to graduate.
“It was, I’d say, a good group, a close group. We’re more than friends; we’re like brothers.”
Asked how he felt when he learned about his upcoming Hall of Fame induction, Flowers responds, “The first thing I thought about was my teammates. The most important thing was knowing how happy it made my family and my teammates.”
College football was different game
How, Flowers is asked, would that team fare today?
“Oh, we wouldn’t,” he answers. “The players today are bigger, faster and stronger. There are 250-pound linebackers now who could outrun our 185-pound backs from back then.
“But I just don’t think you should compare. We were bigger and stronger than the players of the ’30s and ’40s. The players 20 years from now will be faster and bigger than the ones today. Most important is how you stack up in your own time. You just can’t compare eras.”
True, and for another reason as well. Back in 1959, the Ole Miss Rebels, like all college football teams, played both ways. Flowers, a 200- pound fullback, also played outside linebacker. “Yeah, I played behind Larry Grantham, who was the end on my side, so I got to jump on about two or three pile-ups a game. Not many plays made it back to me,” Flowers says, chuckling.
More interesting than comparisons between today’s and yesteryear’s teams would be to imagine today’s 325-pound linemen trying to play both ways. A lot of 300-pounders would become 250-pounders in a hurry.
LSU loss `still breaks my heart’
Flowers led the SEC in scoring and rushing in ’59. He captained the Southeastern Conference’s Team of the Decade (1950-59). He outscored Ole Miss opponents 11 touchdowns to three. Over his three seasons, he was part of teams that won 28 games, lost 4 and tied 1. He was on teams that won two Sugar Bowls and one Gator Bowl.

Charlie Flowers, right, with teammate Bobby Franklin at 2013 celebration of the 1959 team at the MSHOF.

Given all that, Flowers is asked, what stands out most about your career? What do you remember most besides your friends and their successes?
“That’s easy,” he says. “I remember the game we lost. I remember Billy Cannon’s punt return. I remember missing that tackle.”
LSU beat Ole Miss 7-3 on Halloween night in perhaps the most famous college football game of all. Ole Miss won the Sugar Bowl rematch, demolishing the Tigers 21-0, but . . .
“The one we lost sticks out,” Flower says. “It cost us the national championship because they didn’t vote after bowls back then. And everyone knew — we knew, LSU knew, too — we were the better team. But we weren’t on that wet, muddy field that night. It broke our hearts.
“It still breaks my heart. You’d think, by now, I’d be over it. But I’ll never get over it.”
•••
End of year giving? Remember your MSHOF.