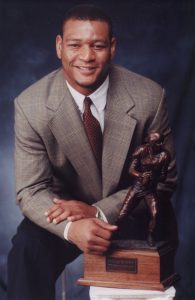 The C Spire Conerly Trophy is presented annually to the top college football player in Mississippi and is named after Charlie Conerly, a Mississippi Sports Hall of Famer, college All-American, an NFL rookie of the year and NFL All-Pro who quarterbacked the New York Giants to a world championship.

Fans and sports media reporters covering college football in the Magnolia State help select the winner.  McAllister is among past winners of the award, including other former and current NFL players such as Dak Prescott, Eli Manning, Evan Ingram, Anthony Dixon, Patrick Willis, Jerious Norwood and Michael Boley.

McAllister, a Saints radio analyst, is a 2014 inductee into the Mississippi Sports Hall of Fame.  The Lena, Miss. native played his high school football in Morton, his college ball at Ole Miss and had an illustrious 8-year professional career with the Saints cut short by a series of knee injuries.

A fan favorite, McAllister holds numerous rushing records both at Ole Miss and with the Saints team during his playing career.  Saints Head Coach Sean Payton says McAllister “has always embodied the spirit of the New Orleans Saints and the city of New Orleans.”

“We’re pleased that Deuce could work this appearance into his busy work schedule,” said MSHOF Executive Director Bill Blackwell.  “The team plays just two days after our event in Dallas in a Thursday Night Football game with the Cowboys.  Having won this award, we look forward to his comments at this year’s event.”

This will be the 23rd annual presentation of the trophy, which was won last year by Ole Miss wide receiver A.J. Brown.  The 6th annual Entergy Kent Hull Trophy will also be presented that night to the top offensive lineman in college football in the state.  Coaches and finalists from all the schools are expected to attend

For ticket information, contact the Mississippi Sports Hall of Fame & Museum by phone at 601-982-8264 or order tickets online here.