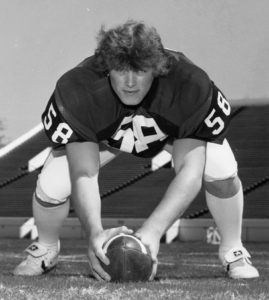 The trophy’s namesake, Kent Hull, is a 3-time NFL Pro Bowler and member of the Mississippi Sports Hall of Fame.

JACKSON, MISSISSIPPI — Just prior to tee off at the Hull Foundation’s annual golf tournament, the Hull Foundation, the Mississippi Sports Hall of Fame and Entergy Mississippi announced that the utility will be the title sponsor of the Kent Hull Lineman of the Year award.
Since 2013, the trophy has been given annually to the best collegiate offensive lineman in the state. The winner must also exhibit strength, quickness, toughness, intelligence, humility,  leadership and an intense work ethic—traits that Hull, a 3-time NFL Pro Bowler and member of the Mississippi Sports Hall of Fame, was known for before his untimely passing in 2011.
The trophy is awarded by the Hull Foundation, created 20 years ago by Hull to raise funds to support organizations serving the needs of less fortunate children. The foundation is continued today by his family and friends.
“Whether playing football or repairing an electrical outage, linemen are tough, strong and work in adversarial conditions,” said Haley Fisackerly, Entergy Mississippi president and CEO. “We recognized that common thread, but what really sold us on this sponsorship is that it will allow the Hull Foundation to focus 100 percent of its efforts on being the strongest fundraising tool for children in need as possible. That fits hand in glove with our focus on strengthening and improving families and communities.”
The Hull Foundation’s most recent partnership has been with the UMMC Candlelighters of Blair E. Batson’s Children’s Hospital in Jackson. The Candlelighters’ mission is to meet the needs of patients and their families while the child is hospitalized. The Foundation is the primary benefactor of the Candlelighters.
“On behalf of The Hull Foundation, we are honored and humbled by Entergy’s agreement to be our partner going forward.  We look forward to continuation of The Entergy Kent Hull Lineman of the Year trophy and all the qualities on and off the football field that it represents as well as taking our support for The Candlelighters to new levels,” said Drew Hull, son of the late great Kent Hull.
“We are delighted to have Entergy on board and grateful to C Spire for encouraging this sponsorship.” Replied Bill Blackwell, Executive Director of the MS Sports Hall of Fame and Museum.  “The Entergy Kent Hull Lineman of the Year trophy will be presented to this year’s recipient at the C Spire Conerly Trophy Presentation on November 28.  It will be held at the Hilton Jackson with Archie Manning as the keynote speaker.”
Entergy Mississippi, Inc. provides electricity to approximately 445,000 customers in 45 counties. Entergy Corporation is an integrated energy company engaged primarily in electric power production and retail distribution operations. Entergy owns and operates power plants with approximately 30,000 megawatts of electric generating capacity, including nearly 9,000 megawatts of nuclear power. Entergy delivers electricity to 2.9 million utility customers in Arkansas, Louisiana, Mississippi and Texas. Entergy has annual revenues of approximately $10.8 billion and nearly 13,000 employees.