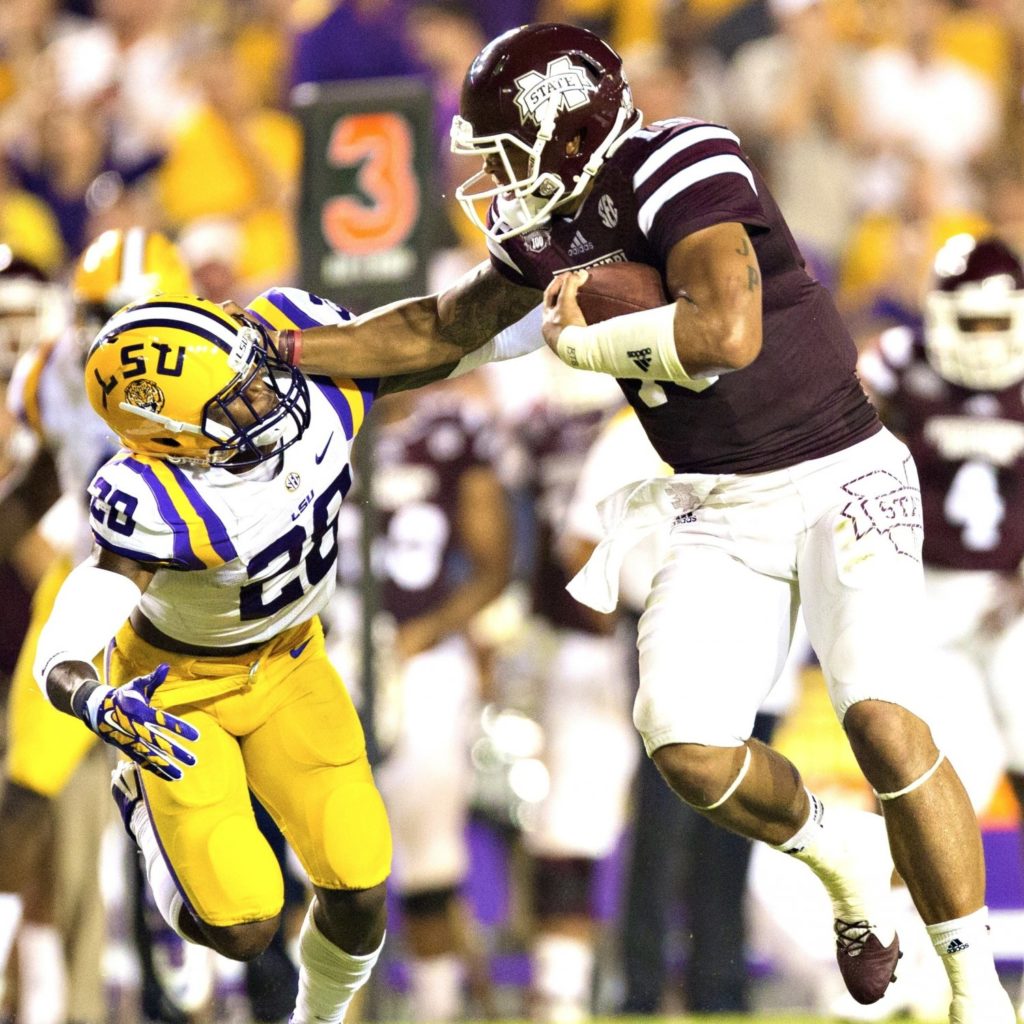 Dak Prescott ran with power, as seen in this run against the LSU Tigers at Baton Rouge. 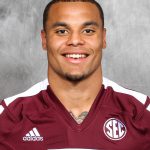 lineman.
All 10 four-year, football-playing universities and colleges were represented at Tuesday night’s banquet, attended by a sellout crowd at the Mississippi Sports Hall of Fame and Museum.
The other six nominees: Belhaven wide receiver Greg Livingston, Mississippi College defensive back Dylan Klibert, Southern Miss defensive end Dasman McCullum, Millsaps defensive end Zach Bell, Jackson State wide receiver Daniel Williams and Mississippi Valley State wide receiver Julian Stafford.
Prescott, a junior from Haughton, La., produced eye-popping statistics as well as victories for the Bulldogs. In the past seven seasons, only two college players have passed for as many as 240 yards per game, while running for at least 75 yards per game. Prescott is one. The other was Heisman Trophy winner Johnny Manziel.

All during the past regular season Prescott has been mentioned prominently on Heisman Trophy candidate lists. He also has been named a finalist for the Maxwell Award as the nation’s top player and the Davey O’Brien National Quarterback Award. The winner of both those awards will be announced live on ESPN during an awards program in Orlando, Fla., on Dec. 12.

Tunsil, a freshman All American at left tackle in 2013, was a preseason and mid-season All American. Gabe Jackson of Mississippi State won the first Hull Trophy.

C Spire has sponsored the outstanding player award program for all major college sports in Mississippi since 1998.  “We’re very pleased with the caliber of players selected as nominees and finalists for the C Spire Conerly Trophy in 2014,” said Jim Richmond, vice president of Corporate Communications for C Spire. “This has been one of the strongest years in the award’s history in terms of individual and overall performance and leadership among all of the schools who submitted nominees for the award.  Our winner is not only a great football player, but an outstanding young man with good character, a strong record of community involvement and a terrific work ethic.”

Now in its 19th year, the Conerly Trophy presented by C Spire is named after the late Charlie Conerly – the only football inductee in the Mississippi Sports Hall of Fame who was an All-American at a Mississippi university, an NFL rookie of the year and NFL All-Pro member and quarterbacked a team to a world championship.