(From Rick Cleveland: Many readers surely have read Michael McCann’s work in Sports Illustrated or on SI.com. McCann is director of the Sports Law Institute at Vermont Law School, a visiting professor at University of New Hampshire School of Law, and the distinguished visiting Hall of Fame Professor of Law at Mississippi College School of Law. No kidding, that’s his official M.C. title. McCann also serves as NBA TV’s On-Air Legal Analyst. McCann, teaching this week at Mississippi College, took time to answer some legal questions that should be of interest to readers of this website. McCann’s answers follow my questions.)

1) Retired NFL veterans, including many Mississippians, are suing the league for ongoing physical problems they say are due to injuries suffered during their pro football careers. In most cases, they are part of a class action suit. Many of the claims are about brain damage from repeated concussions. How do you see this playing out?
More than 4,000 retired NFL players are part of a class action lawsuit that is currently before U.S. District Judge Anita Dunn in Pennsylvania.  Their central argument is that the NFL concealed important information about the links between playing NFL football and long-term neurological problems, including those associated with concussions.
Although it is clear that many retired NFL players are suffering terribly from long-term neurological problems associated with playing football, their pathway to compensation through law will be challenging.
For one, the NFL argues that these claims are barred through the collective bargaining agreement; essentially, according to the league, NFL players gave up the ability to sue over these health issues through their union’s agreement with the league.  The NFL hopes this argument will get Judge Dunn to dismiss the class sometime this year.
If that fails, the case will move towards pretrial discovery.  There is a good chance the NFL will want to settle the case if that happens to avoid potentially damaging information from being revealed.
But the league may also feel that it would win in a trial.  It could argue that players assumed the risk; that information about long-term neurological problems associated with head injuries and concussions were no mystery (unlike the tobacco industry concealing what they know about the link between tobacco and lung cancer); that players’ injuries may have occurred while playing football in college or high school or earlier; and that some of the older players’ claims are barred through the statue of limitations on those claims expiring.
Most likely outcome: some kind of settlement where retired players, especially those suffering, receive more compensation. 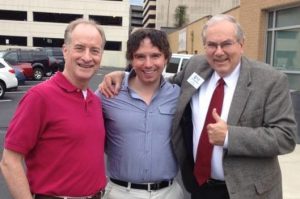 2) The New Orleans Saints Bountygate situation was a huge deal in this neck of the woods. Seemed to this observer there was a dreadful lack of due process on the part of the Commissioners office, particularly concerning the players who were suspended. Your thoughts?
I think the NFL learned through Bountygate that a better approach the next time a scandal emerges is a more collaborative spirit with the players’ association on resolving the matter in the most efficient and fair way.  From the get-go, it seemed the league and players were at odds over what happened, and that set the wrong tone.  An adversarial approach is sometimes the right call, but with a dispute like this — one which concerned player safety and which implicated not only players but coaches — working together probably would have avoided some of the fallout, including Vilma suing Goodell for defamation.
Part of the problem is that the NFL and NFLPA have a strained relationship, to put it mildly, partly due to the lockout and partly due to years of not trusting one another.
Part of the problem is also that the NFL commissioner has tremendous, non-reviewable powers, and that the players accepted those powers in collective bargaining.  Had the lockout not dragged on right up until the 2011 season, I suspect the players would have had more time to negotiate more due process.  But they didn’t, so the commissioner’s authorities remain quite strong.
3) There have been threatened antitrust lawsuits by the non-BCS Division I schools against the BCS bowl system, claiming a monopoly. Does any such lawsuit have a chance of going forward and prevailing in court?
While the new college football playoff system may avert a legal challenge to the BCS, even if the BCS is still sued on antitrust grounds, I don’t believe the BCS would be found unlawful.  I wrote about this topic for Sports Illustrated and argued that while the BCS has clear and unattractive anti-competitive qualities, a court would probably find, on balance, it promotes competition.
The BCS uses empirically-influenced rankings to promote fairness and objectivity.  The BCS also provides an efficient, if imperfect, device for postseason play.  I also find it noteworthy that in spite of calls for a college football playoff system, none existed prior to the BCS’s creation in 1998; if a playoff system was such a good idea (as critics of the BCS contend) why did none exist in the 50+ years of organized college football?  Seems like the BCS fits the saying, “don’t let the perfect be the enemy of the good”.
4) The NCAA recently banned twitter hashtags on college football fields. How can they legally do so?
The NCAA and its member institutions have certain legal powers over game presentation, and those powers probably allow the NCAA to enact this policy.  It is not clear that this ban implicates the First Amendment, especially since it seems directed more at commercial speech than free speech.  But this seems like an odd, almost counter-intuitive policy in a world where twitter has become increasingly part of the sports conversation.
5) There is a pending Ed O’Bannon vs. the NCAA class action suit that some have suggested could bring down the NCAA. A ruling is expected next month. Is this a big, big deal? And why?
The O’Bannon case is one that I have written about for Sports Illustrated, both on-line and in the magazine, about a half dozen times and I expect to keep writing about it.  It could “the big one” – the case that leads to college athletes being compensated.  His basic argument is that when players image and likeness is used for profit by others, including the NCAA and its member schools and video game companies, players should be paid.  This is true even though college players sign paperwork each year in college that arguably relinquishes their right to be paid – at least while they are in college — for their image and likeness.  On the other hand, student-athletes don’t seem have much choice since if they don’t sign, they aren’t eligible to play.  If they aren’t eligible to play, they lose their scholarship.  If they lose scholarship, they may not be able to afford college.
If O’Bannon prevails, former and possible current D1 men’s basketball and football players would be paid for their image and likeness, and that would mean potentially billion — yes, billion with a “b” — of dollars might have to be paid to past players, for all the years they weren’t paid.
But the case is likely a long way from being resolved.  Next month U.S. District Judge Claudia Wilken in California will hear arguments on whether O’Bannon’s class should include both current and former players or just former players.  If the class is certified — meaning the judge indicates who is in it and allows the case to proceed — the case would progress towards a trial, but that would be a number of months away, possibly into 2014.  Before a trial there would be attempts at settlement, and the NCAA may seek a settlement to avoid a trial.  If it goes to trial, the losing side would likely appeal and an appeal could take years.  One concern for the NCAA is that if O’Bannon wins and is awarded damages for violation of antitrust law, those damages would be trebled under antitrust law.
I would be very surprised if O’Bannon v. NCAA does not end in a settlement.  This case, to me at least, is screaming “settlement”.

One response to “Sports law questions? The expert answers”