Steve McNair would have been 40 today 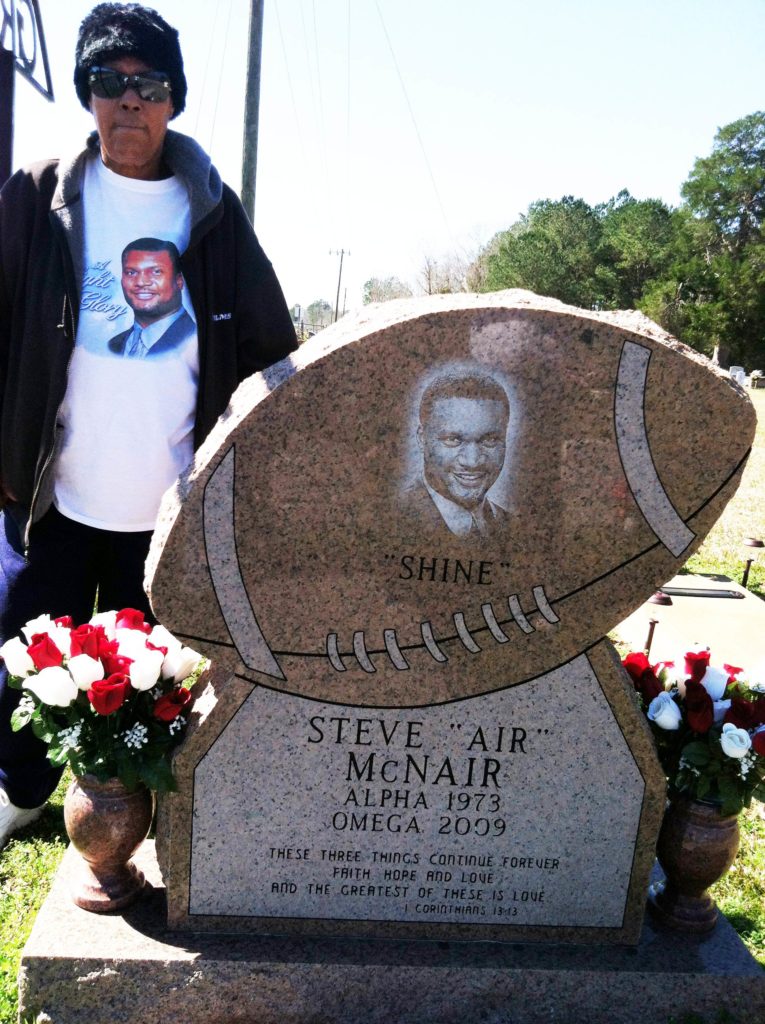 Lucille McNair with her son, Steve, on what would have been his 40th birthday.

A loving mother remembers her son

Lucille McNair, his mother, remembers.
“That boy was in a hurry,” she said. “I was in labor for less than an hour. I barely made it to the hospital.”
Mrs. McNair, recovering from knee replacement, met me on short notice Thursday at Steve’s gravesite, on Highway 84 about eight miles east of Prentiss in Jefferson Davis County. We reminisced, along with two of Steve’s brothers, Jason and Michael.
Mostly, we talked about the good times. Like the day I first met Steve and his mother. They called him Steven back then or “Monk.”
“Monk was short for monkey because when he was just a toddler he was always climbing around on something or somebody,” Mrs McNair said. “Even as a little baby, he was active, alert. He was always watching whatever was going on. He wanted to be part of it.”
Steven McNair was a 16-year-old junior the day I first saw him. He led Mount Olive to a state championship victory, kicking off through the end zone to begin the game and never coming out of it. On offense, he made nearly all the plays, passing, running and even catching one throwback. On defense, he made nearly all the tackles. “Remember that name, Steven McNair,” I wrote.
Mrs. McNair talked about the time Steve, not yet a teen, was raking leaves and burning them in the yard. Somehow, he seared his hands. Lucille had to rush him to the hospital. He wore bandages for weeks.
“He never cried, not once,” Mrs. McNair. “He was tough from day one.”
I always have thought Steve got his toughness from his mother. She raised four sons by herself, often working the overnight shift at a factory in nearby Magee.
We talked about the day we were all together in Lorman when Steve announced, with his mother’s blessing, that he would bypass the NFL draft and return to play his senior season at Alcorn. He said it was hard for him to do, because he wanted to provide for the mother who had provided for him and his brothers.
I’ll never forget what Lucille McNair said. “I’ve worked all these years,” she smiled. “I can surely stand to work one more.”
And she did.
We talked about the day Steve broke the NCAA’s all-time total offense record against Southern University in Lorman. The officials stopped the game and Steve trotted over toward the sidelines to give the ball to his mother. They embraced and kissed, and then Steve went back onto the field and won the game.
We talked about our trip to New York City after that incredible senior season. Steve McNair, from tiny Alcorn, was one of five finalists for the Heisman. I voted for him. He should have won because he was the best college football player in America that year.
Soon-to-be NFL Hall of Famer Warren Sapp, another of the finalists, knew it. At the press conference the day before the presentation, Sapp told all who would listen. “There’s the guy who should win it,” he said, pointing at McNair. “I’ve seen the films of him. I ain’t never seen anybody play like that dude.”
Rashaan Salaam, a running back from Colorado, won the Heisman, which was a shame. Steve McNair not only was a better runner than Salaam, he was a fabulous passer, as well.
We talked about the Super Bowl Steve came so close to winning with the Tennessee Titans. We talked about how he played through so many injuries. We talked about all the good work he did after Hurricane Katrina to help his home folks in South Mississippi.
“Steve brought so much joy to my life,” Lucille McNair said. “He brought so much joy to the lives of so many.”
He died far too young on July 4, 2009, murdered by a female companion who then committed suicide.
Mrs. McNair and I did not talk about that — not on what would have been his 40th birthday.
Lucille McNair already said what needed to be said on the NFL Network’s documentary on her son’s life.
“Nobody’s perfect,” she said. “We all make mistakes, and a mistake cost Steve his life.”
Steve McNair’s 40th birthday was a gloriously sunny one, the first in days in storm-ravaged south Mississippi.
“Happy birthday, Steve McNair,” the mother said just before we walked away. “I love you son.”

One response to “Steve McNair would have been 40 today”