Bill Raphael, a beloved coach and teacher at St. Joseph High School died Friday of pancreatic cancer. He was 87. Steve Shirley (St. Joe Class of 1976), who played and learned under Raphael, shares this remarkable tribute.
Bill Raphael was a legendary math teacher. Through his decades at St. Joseph High School, thousands of students passed through his classroom, learning algebra, trigonometry and geometry. Bill Raphael was also a legendary coach. His athletic record in both football and girls’ basketball has been recorded, his trophies displayed and the field at the new Madison campus will forever bear his name. Those of us who were lucky enough to have “been there” will never forget the Capital Bowl in 1972, when tiny St. Joe beat mighty Murrah on the last play of the game. Many will say this was the pinnacle of his career, and perhaps it was, in terms of success on the field. But I’d like to tell you why I call Bill Raphael: My Coach.
Coach Raphael knew all of the kids. Some were jocks. Some were cheerleaders and homecoming maids. Others were members of the chess club, Mu Alpha Theta or the marching band. As memories fade with each passing year post-graduation, I think most former students tend to remember him only as our football coach, but he was much more. I like to remember his wry smile, above his loosened tie, biting on a piece of chalk. I like to remember his mustard and ketchup bottles, with yellow and red string, playing a trick on an unsuspecting student. I like to remember the way he drew a Crucifix, and the two smaller ones on either side, in the top-center of his chalkboard and on every test he ever handed out. I also like to remember him as a dedicated coach, coated with sweat during our August two-a-days, drinking water out of a hose just like the rest of us. Whether in the hallway of awkward social development or in the trenches during a tight game, he was there with us; we were all his kids. 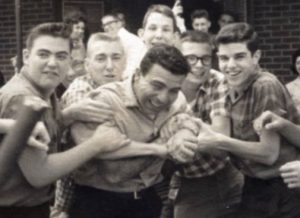 Coach Raphael, surrounded by some of his boys.