Super Rice: You had to see him to believe him 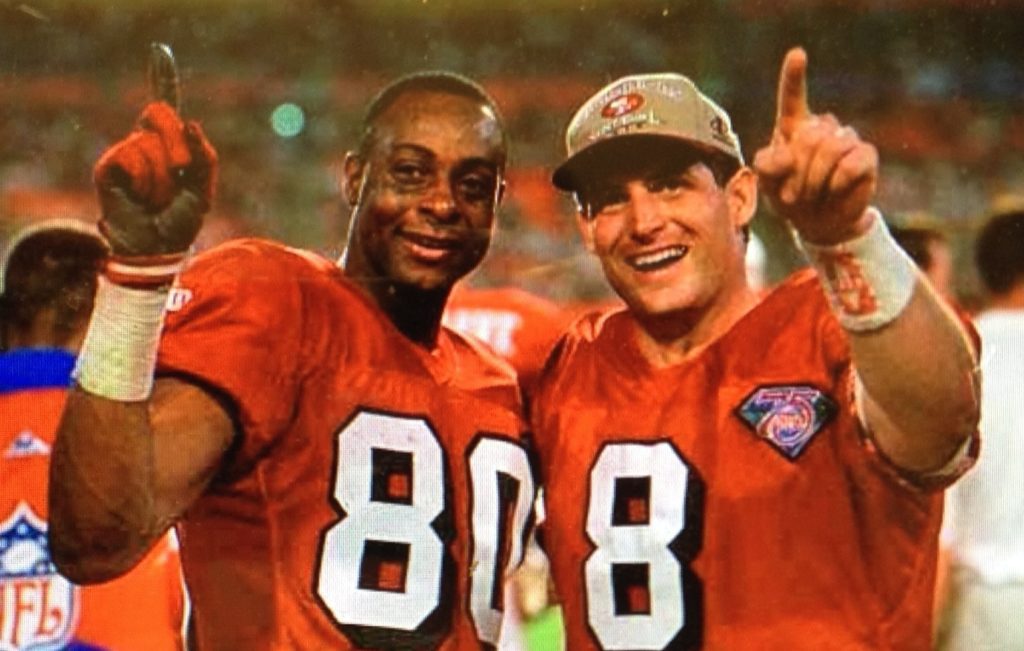 Jerry Rice and Steve Young celebrate after combining to torch the San Diego Chargers in the 1995 Super Bowl.

(Writer’s note: I’ve watched all 47 previous Super Bowls, including 27 in person as a working journalist. Mississippi Sports Hall of Famer Jerry Rice provided three of the greatest individual Super Bowl performances I have witnessed. The following column was written after one of those on January 29, 1995, 19 years ago today, at Joe Robbie Stadium.

MIAMI — We knew from experience that no defense and certainly no single defensive back can stop Jerry Rice. The big pregame question here on Super Sunday, a day that began with Rice taking fluids through an I.V.: Could full-blown flu?
The answer came just 84 seconds into the 29th Super Bowl. Rice streaked past San Diego Chargers safety Stanley Richard and gathered in Steve Young’s perfect, 44-yard touchdown pass. Richard might as well have been a statue. It was the quickest touchdown in Super Bowl history and it was scored by the best pass receiver in football history, period.
The rout was on. Before it was over, Young would throw for six touchdowns, Rice would catch three, and the 49ers would set so many records that even the arm NFL numbers-crunchers were losing count midway through the second quarter.
Unfortunately, for San Diego, the Joe Robbie Stadium scoreboard kept track of the most important numbers: 49ers 49, Chargers 26.
Rice caught 10 passes for 149 yards and ran one reverse for another 10 yards. We knew he was the best. Now we know he’s one of the toughest and most courageous. Seven of those catches came after Rice went to the locker room early in the second quarter to have a separated shoulder iced and bandaged. He basically played thereafter with one arm.
Said Young afterward, “Jerry Rice with one arm is better than anyone else with two.”
Amen.
Who can argue that? Not flu, not a painful injury and certainly not the Chargers could stop Rice. Neither could the Cincinnati Bengals in Super Bowl XXIII. Neither could the Denver Broncos in Super Bowl XXIV. Rice’s numbers for three Super Bowls border on the unimaginable: 28 catches for 512 yards and seven touchdowns.
“We tried to take Jerry out of the game after his shoulder got hurt, but he wouldn’t come out,” said Mike Shanahan, the 49ers offensive coordinator. “I tried to take him out on running plays so he wouldn’t have to block, but when I did, he just sent Ed McCaffrey back off the field.”
Shanahan shook his head, before adding, “Then Jerry knocked down their safeties with tremendous blocks. I’m telling you it takes a special player to do that. He’s the most amazing football player I have ever seen.”
•••
So the NFC has blown away the AFC in still another Super Bowl. Make that 10 in a row and 13 out of 14. Happens every year. This one was over long before a thunderous Indiana Jones halftime show that might have been heard as far away as Havana.
No team ever has played offensive football better than these San Francisco 49ers. Rice is the most lethal, but the Niners have so many weapons.
Asked if the 49ers possess the best offensive in NFL history, Rice answered, “I’d have to say so. We’ve got so many people coming at you from so many different places. And when they shut all that down, Steve Young just takes off and runs.”
No argument here about any of that — or Young’s selection as the game’s MVP, although it just as easily could have been Rice. Young was splendid, completing 24 of 36 passes for 325 yards and six touchdowns. He did not throw an interception and also was the game’s leading rusher with 49 yards on just five carries.
Rice had said on Thursday he hoped Young would be the MVP. As the final seconds ticked off and Young’s MVP was announced, Rice hugged Young the way Young would later embrace the trophy.
“I just told him that I loved him and he deserved it,” Rice said. And I told him to enjoy it because it was something he would remember for the rest of his life.”
Rice’s courage won’t soon be forgotten either. Beforehand, tears rolled down Rice’s face during the national anthem.
“I wanted this one so badly,” he later said. “I’m an emotional guy. I don’t mind shedding tears. When guys see me walking around shedding tears, they know I am fired up and ready.”
Asked about his earlier hints at retirement — forget it, he won’t — Rice responded, “I’m going to address that later on. I’m just going to take time to enjoy this.”
But if by chance, Rice does retire, the 49ers might lose a doubleheader that day.
Said Young, “This was probably my best effort, but I hope there’s more to come. Unless Jerry retires. Then, I quit.”
•••
Both Super Bowl quarterbacks have Mississippi roots.
•••
The Jerry Rice column and many like it are available in It’s More than a Game at your Mississippi Sports Hall of Fame and Museum.

2 responses to “Super Rice: You had to see him to believe him”