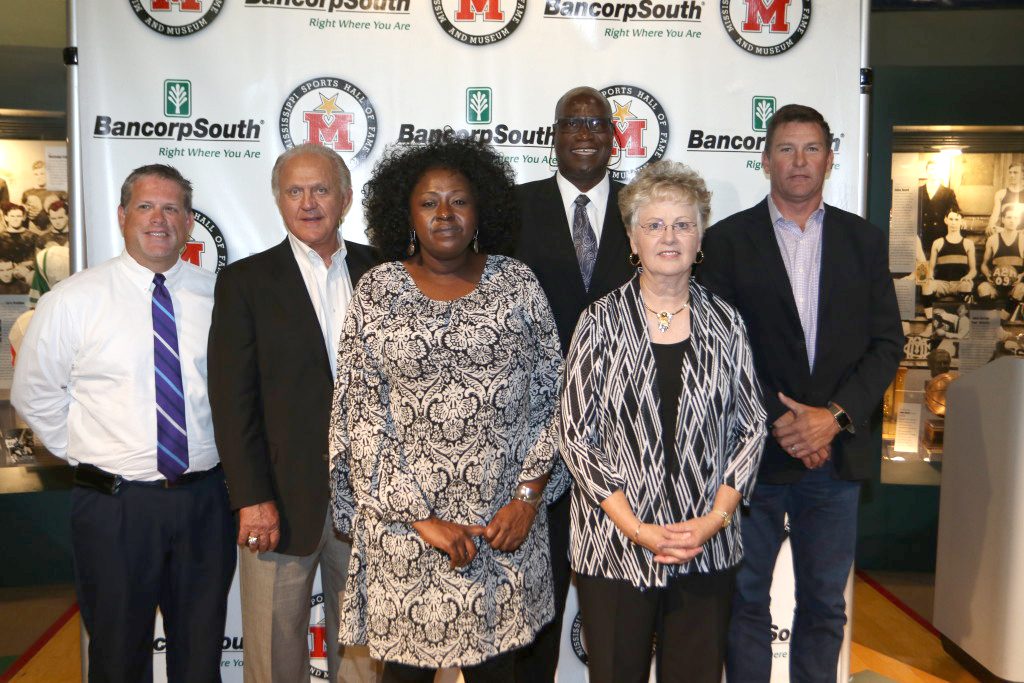 Two College Football Hall of Famers, Wesley Walls and Sean Brewer, and Jackie Sherrill, the winningest football coach in Mississippi State history, are among the selections for the Class of 2016 of the Mississippi Sports Hall of Fame.
The MSHOF’s Class of 2016 also will include Alcorn State and NBA basketball great Larry Smith, Southern Miss women’s basketball coaching legend Kay James and football trailblazer Willie Heidelberg, Mississippi’s first Division I African American football player and standout.
Voting was done by a statewide selection committee representing all facets of Mississippi sports.
The six will be inducted July 30, 2016, in ceremonies at the Jackson Convention Complex.
For more on the Class of 2016, in alphabetical order:
• Sean Brewer: Perhaps the most decorated player in the history of NCAA Division III football, Brewer is the first Millsaps College player ever selected for the College Football Hall of Fame and joins his late father, Ole Miss and NFL football star Johnny Brewer, in the MSHOF. Sean Brewer, a three-time first team All American, will be inducted into the College Football Hall of Fame Dec. 8 at the Waldorf-Astoria Hotel in New York City. Sean Brewer dominated at Millsaps, making more than 400 career tackles and 56 quarterback sacks. The national Division III defensive player of the year honor is named for Brewer, a Redwood native.
• Willie Heidelberg: The late Heidelberg, a Lumberton native, is most known for his two-touchdown performance in Southern Miss’ historic 30-14 victory over Ole Miss in 1970, but his impact on Mississippi college football was much larger. After two years of all-star play for Pearl River Junior College, Heidelberg signed with USM and became the first African American to play at a Mississippi Division I school. He stood only 5 feet, 5 inches tall and weighed but 143 pounds, but his quickness and speed made him an effective runner. Later, Heidelberg became a long-time coach at both Murrah High and Belhaven. He died in October of 2013 at age 63.
• Kay James: James, who coached for 22 seasons at Southern Miss, is the all-time winningest coach in Lady Eagle history with 403 victories. In 27 seasons, James recorded 488 wins against 244 losses. She is one of 46 coaches with 400-plus victories in NCAA Division I history. She also ranks in the top 25 of all-time Division I coaches in victories, seasons coached and games coached. She guided the Lady Eagles to 10 post-season bids and is a member of USM’s exclusive Legends Club. In 2012, James received the Women’s Basketball Coaches Association Lifetime Achievement Award in recognition of her lifetime of service to women’s basketball.
• Jackie Sherrill: Sherrill, a Biloxi native, was an outstanding player for Bear Bryant at Alabama and began his coaching career as a graduate assistant for Bryant in 1966. After several stops as an assistant he became a head coach at four different schools, Washington State, Pittsburgh, Texas A & M and Mississippi State, where he revived the Bulldogs program taking them to six bowl games, four Top 20 rankings in the final Associated Press poll, and the 1998 SEC West title. He remains the only Mississippi coach to take a team to the SEC Championship Game. His career coaching record: 180-120-4.
• Larry Smith: Generally considered the greatest basketball player in Alcorn State’s proud basketball history, Smith went on to play 13 seasons in the NBA where he was consistently a top rebounder. Smith led Hall of Famer Dave Whitney’s Braves to a 27-0 record and a historic, 80-78 NIT victory over Mississippi State in Starkville in 1979. For his Alcorn career, Smith averaged 18 points and 13 rebounds a game. As a senior, the Hollandale native averaged 20 points and 15 rebounds per game. Smith was a first-round pick of the Golden State Warriors in 1980 and he averaged 9.2 rebounds per game for his NBA career and in 1985-86 led the entire NBA in offensive rebounds. Though not known as a scorer, he made 53 percent of his field goal tries over 13 seasons.
• Wesley Walls: This Pontotoc native, a 2014 inductee into the College Football Hall of Fame, is one of football’s last two-way standouts. Walls starred as both a defensive end and tight end at Ole Miss where he made All American as a senior tight end. When Ole Miss defeated No. 12 Alabama at Tuscaloosa in 1988, Walls not only had seven catches for 79 yards but had a quarterback sack for a Rebel defense that did not allow a pass completion the entire game. He was selected as a member of the All-SEC Team of the 1980s and went on to a productive 14-year NFL career during which he made All-Pro four times and played in five Pro Bowls. He caught 540 NFL passes, including 54 for touchdowns.