BOOK WILL FEATURE HALL OF FAMERS 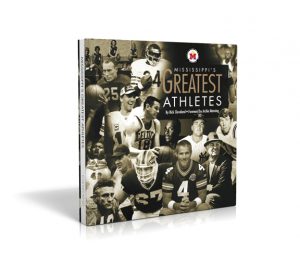 Mississippi’s Greatest Athletes, a coffee table book featuring stories on every Mississippi Sports Hall of Famer, will be available in October.
Written by Rick Cleveland with a foreword by Archie Manning, the book will tell the story of the Magnolia State’s incredible sports history through its heroes.
The book is being published by Nautilus Publishing of Oxford and will be available at fine bookstores all across the state.
Cleveland, the executive director of the Mississippi Sports Hall of Fame and Museum, leans on nearly half a century of covering Mississippi sports to examine how such a small, relatively poor state such as Mississippi produces such a large percentage of the nation’s — and the world’s — greatest athletes.
The official book launch will be held at the museum October 23, which would be MSHOF charter inductee Bruiser Kinard’s 100th birthday.
Said Cleveland, “We’ll call it a book launch and birthday party for Bruiser, who, of course, appears on the cover of the book, along with Walter, Jerry, Bailey, Chunkin’ Charlie, Archie, Brett, Boo and so many other Mississippians who are recognized by first name only.”
Cleveland, who is in his third year at the MSHOF, said this is a project he has wanted to produce since “my first day at the museum.”
“No state, per capita, produces more world class athletes than Mississippi,” Cleveland said. “I knew that from all my years in sports writing, but that fact has been reinforced many times over in my two-plus years here at the Hall of Fame.
Writes Manning in his foreword, “When you grow in a state with such an incredible athletic heritage, you desperately want to become part of it.”
Proceeds from the book will go toward operating expenses at the MSHOF.

2 responses to “BOOK WILL FEATURE HALL OF FAMERS”