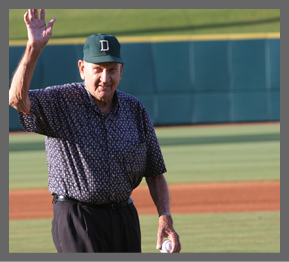 Boo Ferriss, one of Mississippi’s most beloved citizens, will receive the first The Rube award at the BancorpSouth Mississippi Sports Hall of Fame induction ceremonies July 27 at the Downtown Marriott in Jackson.
The Rube is named for the late Michael Rubenstein, the Mississippi Sports Hall of Fame and Museum’s first and only executive director until his death Dec. 1, 2011. The award will go annually to a person whose love and passion for — and contributions to — Mississippi sports have made a meaningful difference.
Ferriss fits the bill. A Shaw native, the former Mississippi State and Boston Red Sox baseball star built a powerhouse baseball program at Delta State.. There, Ferriss developed many of the high school, junior college and college coaches who have won state and national championships and greatly improved the quality of Mississippi baseball.
“When I heard the criteria for the Rube Award described, I immediately thought of Boo Ferriss,” said former Ole Miss and NFL football great Archie Manning. “Growing up in the Delta he was one of my first sports heroes and he has been an unbelievable ambassador both for baseball and for the state of Mississippi. He is the ultimate gentleman. Everybody loves Boo. How could you not?”
Michael’s older brother, Ted Rubenstein of Atlanta, knows his sibling would approve.

“Michael was more about tooting other people’s horns than his own, but I believe he’s smiling in the Hall of Fame upstairs that greatness will be honored in his name,” Ted Rubenstein said. “There’s no better sports story and no better person to come out of Mississippi than Boo Ferriss. He’s a perfect choice for the first Rube Award.”
The July 27 festivities will feature the Hall of Fame’s 50th anniversary induction class: Courtney-Blades Rogers, Eddie Crawford, Sam Hall, Jeff Malone, Rafael Palmeiro and Ennis Proctor.
Weekend festivities will continue at the museum on July 28 with a meet and greet with Hall of Famers at the museum (9:30-11 a.m.) and then a Drawdown of Champions (6:30p-10 p.m.). The drawdown will include both live and silent auctions of sports memorabilia and many other items. For ticket information call 601-982-8264