Posted on: April 21,2015
By CHRIS ALLEN BAKER
FOREST – Just after local native Deuce McAllister was inducted into the Mississippi Sports Hall of Fame last year, an effort was launched to establish an organization to honor athletic achievement across Scott County.
An organizing committee met in Forest to establish the Scott County Sports Hall of Fame with the goal of inducting its first class in 2015. After months of selecting the class and planning the main event, the inaugural induction will become a reality this weekend.
The induction ceremony is scheduled for Saturday, April 25, with a 5 p.m. start time at the 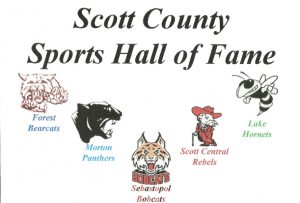 Livingston Performing Arts and Media Center at Roosevelt State Park in Morton. Tickets are $10 each and may be purchased at locations in Forest and Morton and at the door prior to the ceremony. Doors will open at 4:30 p.m.
The 25 members of the Class of 2015 who will be inducted in the first ceremony, grouped by their associated school, include:
Forest: Rashard Anderson, Greg Carter, Tutti Calhoun Carter, James “Bo” Clark, Jack French, James (Jim) B. Harvey, Sylvia Howell Krebs*, Dr. Charles David Lee, Tom Stewart Lee, Jr., Dave Marler, W. D. “Red” Stroud* and Todd Pinkston.
Lake: Freeman Horton, Granville Freeman and Peyton Weems.
Morton: Dr. Howard Clark, Michael Davis, Rita Gail Easterling*, Andre Hollis, Michael Kincaid, Jason Latham, Dulymus “Deuce” McAllister* and Freddy Roberts.
Scott Central: Marlo Perry
Sebastopol: Ed Amis
*Denotes also a member of the Mississippi Sports Hall of Fame.
The induction ceremony will include an invocation followed by the National Anthem by vocalist Natalie Duncan Emmons, East Central Community College Music Instructor. The presentation of colors will be made by members of Boy Scout Troop 63.  Frank Edmondson, president of the Scott County Sports Hall of Fame, will present the 2015 class, introduce the inductees and present their plaques. Inductee Dave Marler will give a response on behalf of the class. A brief keynote address will be provided by Sid Salter of Mississippi State University, formerly of Scott County and the event will conclude with the benediction.
Edmondson, a resident of Lake, came up with the idea of a hall of fame for Scott County athletic interests. He had heard about the same kind of program in two other areas of the state other than the Mississippi Sports hall of fame. Those versions were on a more local municipal level, not county-wide as the one now in Scott County.
“When I heard about it being done in other places, I thought ‘why not Scott County?’ We have such a rich athletic tradition of achievement and this would be a great way to showcase that tradition,” Edmondson said.
He contacted Rick Cleveland, executive director of the Mississippi Sports Hall of Fame and Museum in Jackson, for consultation. “Rick was excited about the idea and encouraged me to pursue it.”
From there, over the course of the summer, Edmondson began talking to prospective residents across the county to get the committee together to make it happen. In its first meeting, the committee elected officers and discussed eligibility rules, possible locations for hall of fame displays and the induction ceremony.
The committee used the eligibility requirements from the state hall of fame as a guide, tweaking it for local needs. “Men and women who have distinguished themselves and gained prominence in amateur and/or professional athletics, who have brought positive recognition to themselves and Scott County Mississippi and to the State of Mississippi” and who have met eligibility requirements of the selection committee can be considered as nominees.
Nomination forms were released and the public was invited to submit nominations.
Committee members made the selection of the first class on October 21.
“The selection of the first class was not an easy task as there are so many worthy individuals who are qualified,” Edmondson said. “There are so many people that are worthy of induction throughout the modern history of our county.”
Edmondson said the first class was much larger than the future classes will be due to it being the first. “We felt the need to more inclusive in the first class but from this point on, each class will have five inductees selected by the committee and a sixth inductee selected by the Hall of Fame Membership,” Edmondson said. “We still have a very large nominee pool to select future classes and it will continue to grow.”
Nominations will be re-opened soon for consideration in the 2016 class. Nominations are due each September 30 to be considered for the following year’s class.
For questions or more information concerning the Scott County Sports Hall of Fame send correspondence by email to scottcountysportshof@yahaoo.com or write to Scott County Sports Hall of Fame, P. O. Box 1040, Forest, MS 39074; phone (601) 775-3857. An online presence has been created on Facebook.