Jackson’s own Jackie Slater, one of the greatest offensive linemen in football history, has been inducted into several halls of fame, including the Pro Football Hall of Fame and the Mississippi Sports Hall of Fame. But today he will walk in a hall where he hasn’t walked since he was 18 years old: the hallways of Wingfield High School.
Slater will be recognized by the Pro Football Hall of Fame and Allstate Insurance Company today at 2:30 p.m., as part of “Hometown Hall of Famers,” a national program honoring the hometown roots of the sport’s greatest coaches, players, and contributors with special ceremonies and plaque dedication events in local communities.
A former high school standout at Wingfield High School, Slater will be presented with his “Hometown Hall of Fame” plaque in the school’s auditorium, where the plaque will live permanently to serve as an inspiration for the school’s students and athletes. The ceremony will be attended by Wingfield High School students, faculty, staff, alumni and Slater’s family members and close friends. Jeff Gibson, Wingfield High School football coach, will serve as the Master of Ceremonies. In addition to the plaque, a commemorative Jackie Slater “Hometown Hall of Famer” road sign will be on display in Jackson.
An offensive tackle from Jackson State University, Slater was a third-round draft pick of the Los Angeles Rams in the 1976 NFL Draft. He went on to become the mainstay of the Rams’ offensive line for the next 20 seasons, which at the time was an NFL record for most seasons with the same team.
Slater, who also starred in basketball at Wingfield, first gained notoriety blocking for Walter Payton at Jackson State. A powerful drive blocker known for his work ethic and leadership skills, Slater blocked for seven different 1,000-yard rushers including fellow Hall of Famer Eric Dickerson. Slater made 18 playoff game appearances, including Super Bowl XIV. His 259 regular-season games played were the most ever by an offensive lineman when he retired. Slater was a five-time first- or second-team All-Pro selection and seven-time first- or second-team All-NFC choice. He was named to seven Pro Bowls and the St. Louis Rams have retired his No. 78 jersey. 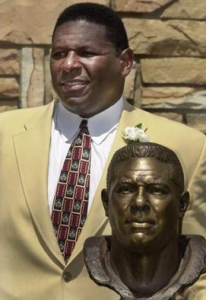 Slater with Hall of Fame bust.

Slater was inducted into the Pro Football Hall of Fame in 2001 and into the Mississippi Sports Hall of Fame in 2003.
What follows is part of a Tuesday interview with Slater:
Q. You came along at a time when the SEC schools were recruiting very few African American players. Now it is inconceivable that a player of your talents would not receive offers from everybody. How do you feel about that?
A. I don’t ever think about it. I look back on my college career and I played at Jackson State and the SWAC at a time when that’s where the greatest talent in the country was. I played with and against great players. I take great pride in where I came from, not only in college but in junior high and high school. I had great coaching all along the way.
Q. Why do you think it is that Mississippi has produced such a high percentage of NFL standouts and Hall of Famers?
A. In a way, that’s inexplicable to me. The one commonality I see among all the Mississippi guys is hard work. I’ve never seen anybody work harder than Walter Payton did. I know how hard I worked. I know how hard Jerry Rice worked. I’ve been around Brett Favre a lot, and I know how hard he worked. The one common thing I see is hard work.
Q. You played at a high level for 20 years in the NFL. Who is the best guy you ever had to block?
A. Reggie White. No doubt about it. He was not only the best pass rusher but the best run defender I ever played against.
Q. You’ve received so many honors over the years. What are you most proud of in your football career?
A. I am most proud of the fact that in all my football days, I gave it everything I had. I did my job as well as I could. I never quit on anybody I ever played for or with.

One response to “Jackie Slater walks in 'old' hall today”