Boo Ferriss was honored all different kinds of ways at Mississippi State on homecoming weekend. He was the grand marshal of the homecoming parade. John Cohen had him address his baseball team. And the MSU Kappa Sigma fraternity chapter named their beautiful courtyard in honor of Ferriss, who was initiated more than 70 years ago. I was asked to introduce Coach at the ceremony Saturday afternoon. What follow are my remarks…

Thank-you,  it’s always great to be here at Mississippi State and it’s always an honor to be in the presence of  Boo Ferriss.

I guess this is my first time to be in this Kappa Sig house since homecoming in 1973, 40 years ago, when I was a Kappa Sig at USM and the Golden Eagles played up here. I do not possess a steel-trap memory like that of our honoree today. I couldn’t remember much about the game 40 years ago. I couldn’t even remember who won, so I looked it up. It wound up a 10 to 10 tie. I also can’t remember much about the post-game homecoming party here except that I had a really good time. It’s probably a good thing I can’t look up the statistics from the post-game party. Come to think of it, post-game parties like that one are probably why I couldn’t remember who won the game.
I spent more than 40 years of my life covering sports in Mississippi. I covered 29 Super Bowls, several World Series, the Masters several times, U.S. Opens and Final Fours. With all that in mind, people often ask me what the highlight of my sports writing career has been.
That’s an easy one. Several years ago, I approached Boo Ferriss about writing his biography. He said he was flattered but that he didn’t think so. He said books were for people like Joe DiMaggio and Ted Williams, not for people like him.
I politely disagreed. I told him that in many, many ways his story was a lot more compelling than DiMaggio’s or Williams’ or of any other baseball player I knew. Coach said he would think about it.
So then I went to my ace card. I approached his wife Miriam and daughter Margaret and got them on my side. The end result was Coach agreed to do the book and I got to spend a great deal of time over the next two or three years talking to Coach about his life and about his career in baseball. That time we spent together, without question, has been the highlight of my professional career. I hope the book reflects that. I do know we are about to run out of our third printing, which is a tribute to Boo.

Boo speaks with his sister and mother before Game 3 of the 1946 World Series at Fenway Park. He shut out the Cardinals that day.

People often ask me if I have a  favorite athlete I ever covered. My answer, again, is an easy one: Boo Ferriss. And  I never even saw him pitch a game, except on old, grainy black and white film.
Any decent sports writer learns early on in their career that we aren’t writing about athletes. We are writing about people who happen to be athletes. We write about people who have strengths and weaknesses. We write about people who have families. We write about people who have trials and tribulations along with their successes.
I am here to tell you today that the best person, the finest human being, I ever met or wrote about― in or out of sports ― is the man we honor here today, Boo Ferriss.
He might well have become the greatest Major League baseball pitcher of all-time if not for a freakish shoulder injury. He won 46 games over his first two seasons with the Boston Red Sox. Midway through his third season he suffered the injury that changed his life. And guys, it’s the manner in which he handled that injury ― which essentially ended the most promising pitching career in baseball history ― that separates Boo Ferriss from the crowd.
He handled it with grace and dignity and made the very best of a bad situation. He dedicated his life to teaching others how to play and coach the game he could no longer play himself. He made them not only better players but also better people. He has made Mississippi State, Delta State and the state of Mississippi far better places.
Furthermore, he has lived every second, of every minute, of ever hour, of every day, of every week and every year by the Golden Rule. He has treated everyone he has encountered with great care and kindness. In doing the book, I talked to legions of his former players. They all say that they still receive letters of encouragement and birthday and anniversary cards from Coach. He never fails to ask how their sons and daughters ― and now their grandsons and granddaughters ― are doing. He always has an encouraging word.
To a man, they say, that they thought they must be Coach’s favorite ― and then they found out he treats everyone the same way. He treats all his former players ― and even some players he had to cut ― as if they are his favorite player.
Since we’re here at Mississippi State, I should tell you a story from Boo’s days here. My favorite might be when State was playing Alabama in a weekend series. Back then, they played two-game weekend series, one on friday and one on Saturday. In the Friday game, Coach pitched and pitched well. In the Saturday game he played first base. He pitched right-handed, he played first base left-handed. During the Saturday game two Alabama fans came over to the State dugout when State was hitting. They approached Boo and one of them said, “My buddy and I have a $10 bet. He says you’re the guy who pitched yesterday, and I say you aren’t because the pitcher yesterday was right-handed and you’re obviously left-handed.”
Coach Boo said, “Buddy, I hate to tell you, but I’m the same guy. I’m afraid you are out 10 dollars.”
That’s how gifted he was athletically, he could throw with either hand and was also the best hitter on the team. I hope all of you know that in the grand history of Mississippi State baseball, Boo Ferriss was the first fully-scholarshipped baseball player. He received that scholarship from Dudy Noble, whose name is on that ballpark over yonder.
You should also know that the injury that ended Coach’s career was a slightly torn labrum. Now, they fix it in a few minutes and the recovery time is six to nine months. Pitchers often come back better than ever. In 1947, such medical technology did not exist. They called what Boo had “dead arm.” And that was that.
The truth is Coach never did know what the specific problem was until we did the book and I had Buddy Savoie, an accomplished shoulder specialist, look at his arm. Buddy found the problem immediately. It was slight tear, but it was a tear nonetheless that was still there. Labrums don’t repair themselves. 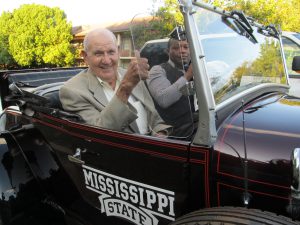 And I’ll never forget what Coach said:
“It’s interesting, I’ll say that, but it’s water under the bridge,”  Coach said. “It doesn’t bother me.”
Then he laughed. “Now my wife Miriam says we ought to get Buddy to fix me up,” Ferriss said. “She says she’d roll me out to the mound. With the millions they’re paying these days, she thinks I could still go five innings.”
That’s the outlook on life that makes Boo Ferriss such a special human being and made his story so compelling. John Grisham, another Mississippi State alum, wrote the foreword to my biography of Boo. He’s only made about a billion dollars with his writing.
As I say, I wrote for a living for more than 40 years. But Grisham and I will both tell you that the best writing in this book were the kind and thoughtful letters Boo Ferriss wrote back to his mama 65 and 66 years ago when he was the hottest pitcher in baseball.
Writing letters, sadly, is a lost art today with facebook, twitter, email and the rest. Coach perfected the practice of letter-writing and still uses it. His hand writing is like art work and his words to this day are thoughtful and meaningful. His hand writing reflects the way he approaches life, with such elegance and grace.
All of us, Kappa Sigs or not, would make this world a much better place if were just a little more like Boo Ferriss.
We can’t all pitch as Boo Ferriss did. We can’t all be great athletes, but we can write thoughtful letters to our loved ones and we can treat the people we encounter with the kindness we would hope to receive from them.
We would all be better people, make Mississippi State and Mississippi a better place, if we would try to emulate Boo Ferriss.
That’s why I think what we are doing here today is so meaningful, so proper.  So, without further adieu on this day October 12, 2013, this courtyard is hereby dedicated the David “Boo” Ferriss Courtyard by the Brothers of the Delta-Chi Chapter of Kappa Sigma Fraternity.”
And now I present to you David “Boo” Ferriss, a man who makes us all proud.
•••
To support your Mississippi Sports Hall of Fame and Museum click here. 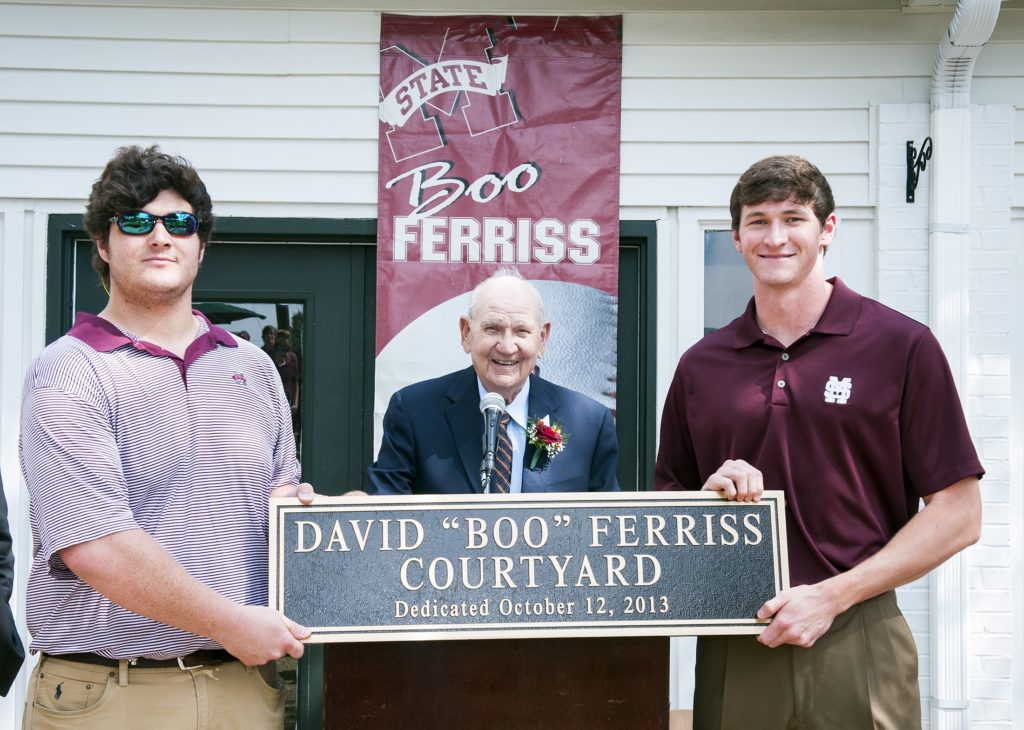