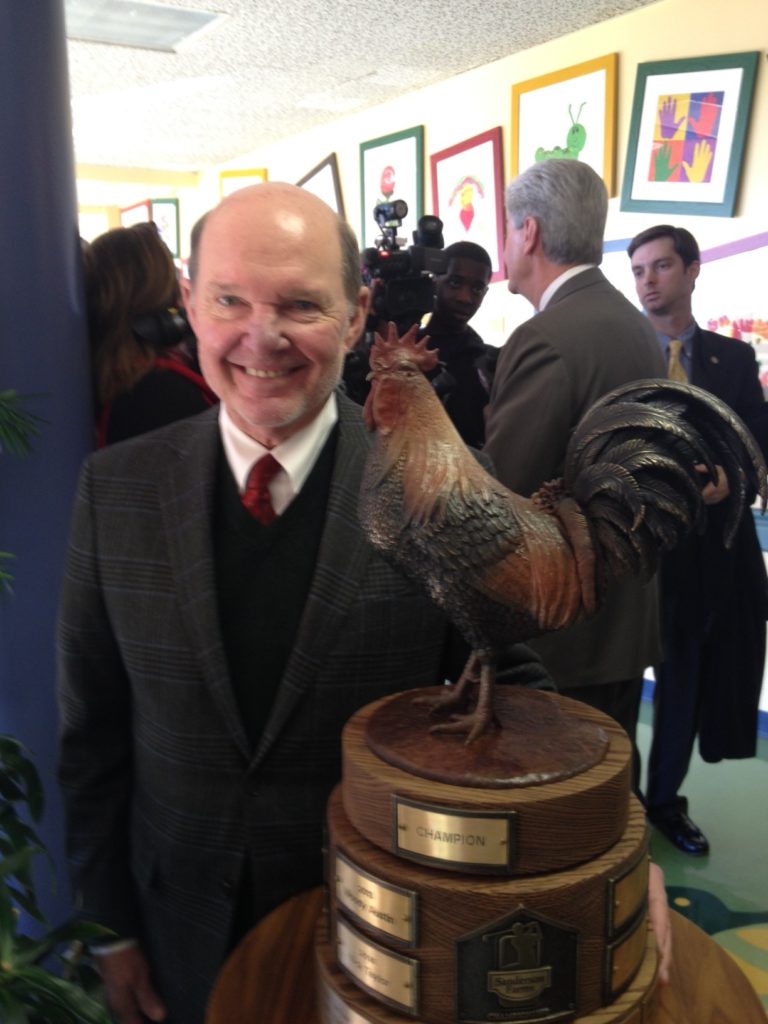 Joe Frank Sanderson of Sanderson Farms today announced a $1,102,700 donation from the Sanderson Farms Golf Championship to Blair E. Batson Children’s Hospital at University of Mississippi Medical Center.
That is a record donation, more than twice last year’s, for Mississippi’s only tournament on the PGA Tour. It was announced Tuesday morning in the lobby of the hospital.
Sanderson stepped forward to save the event in 2012 when the tournament lost its previous sponsorship. The tournament, which is aired worldwide by The Golf Channel, makes a $20 million-plus impact on Mississippi’s economy.
Said Gov. Phil Bryant, “Until Joe stepped forward, we were on the verge of losing something that this state has had since 1968….Joe is a humble man and he gives credit to others but without Joe we would not be here today. Lives have been and will be saved by this golf tournament.”
Tournament officials are already working toward the 2015 Sanderson Farms Championship, which will be held Nov. 2-8.
•••
A press release from the Batson Children’s Hospital:

JACKSON, Miss. – More than 1,000 babies and children each year receive life-changing and complex treatment at the Children’s Heart Center at Batson Children’s Hospital.

But current space allocated for such procedures is but a fraction of what’s needed. Ditto for staff, patient beds, and imaging equipment needed to diagnose and treat congenital heart defects, which affect nearly one out of every 100 babies born.

The continued support and partnership of the PGA TOUR’s 2014 Sanderson Farms Championship and its host organization, the nonprofit Century Club Charities, is bringing the Heart Center closer to a much-needed expansion that could include 20-24 additional beds, new operating rooms, and an all-new specialized imaging center.

Officials with Century Club Charities today presented a $1,102,700 check to the nonprofit Friends of Children’s Hospital, a volunteer organization that toils year-round to raise money for Batson. Century Club Charities’ generous donation comes from a portion of funds generated by the golf tournament held Nov. 3-9 at the Country Club of Jackson.

“Our goal was to get to a million dollars, and we were blessed with a great response from the sponsors and players, and good weather,” said Johnny Lang, president of Century Club Charities.

Profits from PGA TOUR events nationwide raise money for the chosen charity of tournament hosts. Sanderson Farms agreed in 2013 to take over title sponsorship of the local tournament. Century Club Charities, whose mission is to promote the game of golf for charitable benefit, last year presented a total $500,000 in tournament proceeds to Friends for growth of the Children’s Heart Center.

“We are pleased to have a part in the evolution of the Children’s Heart Center, and are excited to see what the future holds for this hospital,” said Joe Sanderson, CEO and chairman of the board of Sanderson Farms. “The primary reason this tournament exists is to raise money for Friends of Children’s Hospital, who in turn helps make Mississippi’s only children’s hospital a health-care destination.”

“This is a spectacular achievement,” said James E. Keeton, UMMC vice chancellor for health affairs.  “On behalf of UMMC, Children’s of Mississippi and all the future patients who will benefit from an addition to the children’s hospital, our heartfelt thanks go to Joe Sanderson, Friends volunteers, and all the people who had a hand in making this tournament a huge success.”

Currently, the Children’s Heart Center is virtual – not its own brick and mortar – but instead space allocated for heart services at Batson. The heart team has rapidly outgrown that space, and since the center’s creation in 2010, has operated on about 2,000 patients. Other procedures, including heart catheterizations and echocardiograms, bring the number treated to more than 5,000 babies and children.

“Unfortunately, we don’t have the infrastructure for sustainability. We need adequate rooms, ICU beds, operating rooms, and a pediatric imaging center to support the commitment we’ve made,” Salazar said.

“Now is the time to create an infrastructure for sustainability, and to make long-term care of these children a reality,” he said. “The contributions of the Sanderson family and the tournament will go a long way. It’s very timely that they are giving us this wonderful gift toward that mission.”

Batson and Children’s Heart Center supporters envision a new building to be constructed in the space adjacent to the current children’s hospital building. Among other things, it would house a new lobby and clinical space for the Children’s Heart Center, including surgical suites, a cardiac intensive care unit and an imaging center.  A construction timeline and costs are still in the planning stages.

“Part of the excitement about our affiliation with Friends of Children’s Hospital is that (the Championship) is the largest and only professional sporting event in the state, and we have the only children’s hospital in the state,” Lang said. “We are thrilled with this affiliation.”